National Lampoon Presents The Beach Party at the Threshold of Hell2006 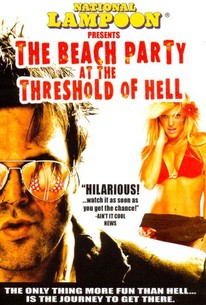 A handful of America's least likely icons set out to reclaim the nation in the wake of a nuclear apocalypse in this ambitious independent satire from filmmakers Kevin Wheatley and Jonny Gillette. In the year 2075, America's major cities are wiped out by nuclear warfare, and the nation's survivors go underground to wait out the fallout. In 2097, the brave souls who are still around return to the surface to establish the New America, led by Tex Kennedy (Kevin Wheatley), the last survivor of the old nation's greatest political dynasty. Accompanied by his android bodyguards Yul (Chandler Parker) and Quincy (Paul Whitty), Tex sets out from what once was California to form an alliance with Benny Remington (Bill English), who was named king of America during America's two decades underground. Benny was crowned by his uncle, famous car salesman and radio commentator Clark Remington (Daniel Baldwin); however, Clark's deranged son, Vincent (Lea Coco), believes that America's throne is rightfully his, and won't let Benny have it without a fight. As Vincent and his right-hand man, Marcellus (Ted Schneider), search for Benny and Tex, the leaders head to Florida to take on Yorick (Alex Reznik), who has established a powerful fortress called "the Threshold of Hell," a violent domain populated by an army of brainwashed minions. Along the way, they encounter a number of strange and fascinating characters, including friendly cannibal girls, monstrous snakes, distant relatives of Fidel Castro, and perhaps the Devil himself. The Beach Party at the Threshold of Hell: The History of New America, Part One received its world premiere at the 2006 Los Angeles Film Festival.

Paul Whitty
as Quincy the Robot

Katherine Flynn
as Allison
View All

An insufferably one-note, postapocalyptic "satire" set in the aftermath of the nuclear destruction of the U.S.

Funnier on paper than in reality, this self-impressed film has the stop-and-go pace of a student driver.

From the puns to the palette, this is one vacation in Hell that I won't mind taking again!

The loopiest thing to come down the pike in many a year. Fans of What-the-F Cinema, get thee to the theater.

Very strange, very non-National Lampoon black/offbeat post-apocalyptic comedy that's not really funny but not really bad either. It's sort of a companion piece to Radioactive Dreams--not that anyone remembers that movie but it has that same 80's gritty vibe going on. The most annoying thing is the audio which sounds like it was recorded in a ventilation shaft.