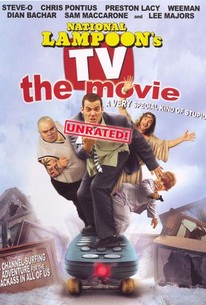 In his 1961 speech to the National Association of Broadcasters Newton Minnow claimed that television had become a "vast wasteland," and with this comedy the warped folks at National Lampoon prove that Minnow's so-called "vast wasteland" has since been flooded by a festering cesspool of filth and depravity. Absolutely nothing is sacred as Jackass stars Steve-O, Chris Pontius, Preston Lacy, and Jason "Wee Man" Acuna skewer small screen conventions by targeting everything from reality television to talk shows. For viewers looking to find out just how far the bar has been lowered, who better to turn to than the satirical minds at National Lampoon?

There are no critic reviews yet for National Lampoon's TV: The Movie. Keep checking Rotten Tomatoes for updates!

There are no featured audience reviews yet. Click the link below to see what others say about National Lampoon's TV: The Movie!