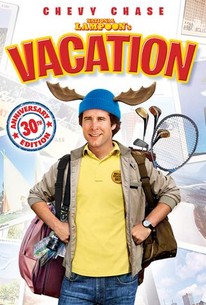 Critics Consensus: Blessed by a brilliantly befuddled star turn from Chevy Chase, National Lampoon's Vacation is one of the more consistent -- and thoroughly quotable -- screwball comedies of the 1980s.

Critics Consensus: Blessed by a brilliantly befuddled star turn from Chevy Chase, National Lampoon's Vacation is one of the more consistent -- and thoroughly quotable -- screwball comedies of the 1980s.

Critic Consensus: Blessed by a brilliantly befuddled star turn from Chevy Chase, National Lampoon's Vacation is one of the more consistent -- and thoroughly quotable -- screwball comedies of the 1980s.

The first film in the Vacation comedy franchise stars Chevy Chase as Clark Griswold, an ad exec who becomes consumed with taking his family cross-country to Wally World, a California amusement park. Less a vacation than a descent into a peculiarly American kind of hell, the Griswolds suffer through an endless series of catastrophes, culminating in a run-in with the law. ~ Jason Ankeny, Rovi

Half-baked but occasionally hilarious, National Lampoon's Vacation gets a reasonable amount of mileage out of depicting the disaster-prone journey of a "typical" family of four, the Griswolds of suburban Chicago.

Despite plenty of gross-out gags and dumb slapstick bits, the careful viewer can occasionally detect some acrid and original satire in this 1983 film.

The result is not so much a comedy about American values as a 2,500 mile skid on a banana skin. The visual gags come thick and fast, and are about as subtly signposted as the exit markers on a freeway.

The result is a confident humor and throwaway style that helps sustain the laughs -- of which there are quite a few.

...Hughes and Ramis make a decent fist of finding humour in everyday situations...

It's a pleasant diversion with a few memorable bits and a likable cast, but true comic invention is hard to locate in the meandering screenplay by the late John Hughes.

Director Harold Ramis, who went on to make Groundhog Day, keeps the silliness coming at a fast and furious pace.

Thanks largely to Chevy Chase's zaniness and comic timing this is a very funny movie.

The humor in Vacation also taps into something beyond the trials and travails of a road trip gone wrong.

National Lampoon's Vacation is a comedic cross-country adventure like no other, thanks to Chevy Chase and the rest of the Griswold family.

Jeremy Lebens
We Got This Covered

The Griswolds are a national treasure.

"Vacation" is the dream film that everyone wanted from Chevy Chase (especially me). He livens any film that he is in, from his facial expressions to his snappy dialogue delivery. When the Griswold family sets out on a family road trip to Wall World, chaos ensues as they try to reach their destination. Such a simple story with such greatly written humour and witty dialogue makes this film one to watch over and over again. The cast works great together and you totally buy them as a family. The R-rating really helps the gags feel natural and as if an actual family would be going through these scenarios. In the end, the film was not all about the destination, but the journey to get there, and let me say, it is one hilarious journey. My only complaint about this film is that there are a few moments that seemed to pad out the run time, but aside from that, it is a near perfect comedy for what it sets out to be. I love "Vacation."

This is for sure one of the most remember and one of the comedy movies that is the characteristic of the 80's American humour.

National Lampoon's Vacation is a very good comedy film that is one of the finest comedies of the 80's. With a great cast lead by Chevy Chase. The film is engaging from start to finish, and there are several memorable scenes in the film. I really enjoyed the film, and I'm glad that I finally got to see it. What makes the film work well is the great chemistry between the cast, and the script is very well written, with plenty of laugh out loud moments. Vacation is great fun from start to finish, and is a must see for viewers that need to watch something humorous, well acted and memorable. This is a great comedy and is well worth your time. Chevy Chase is at his funniest here, along with the sequel that would follow a few years later after European Vacation, Christmas Vacation. The film is very good and delivers effective laughs throughout. The script like I said is well written, with a good story that is simple, yet is peppered with good gags, National Lampoon's Vacation is a memorable comedy that ranks among the finest films of the 80's. I think it's a shame however that only one sequel in this series matched this film because, there could have been a few memorable entries, and however European Vacation and Vegas Vacation would never match this movie. Stick with this film as well as Christmas Vacation and forget the other two films in the series ever happened. With good acting, effective jokes and plenty of memorable moments on-screen, National Lampoon's Vacation is a film well worth your time, and ranks among the comedy classics of the 80's.

Directed by Harold Ramis, scripted by John Hughes, and starring Chevy Chase, this film is essentially one of the all-time greatest screwball comedies. That it's a road movie makes it even better in my eyes. Clark Griswold is your typical all-American whose just trying to be a good husband and loving father. He and his family set out from Chicago to L.A. for what should be a great vacation, with their ultimate destination being a theme park called Wally World. The trip ends up being anything but paradise as they family encounter a number of oddball problems and colorful events that just keeping piling on top of one another. Chase is great, and so is Beverly D'Angelo as his wife Ellen. Their kids Rusty and Audrey are played by Anthony Michael Hall and Dana Barron, and, they're decent, but nothing amazing. The real scene stealer though is Randy Quaid as Clark's redneck cousin-in-law Eddie, who is really obnoxious and a big leech, yet still lovable, and definitely memorable. Eugene Levy also appears in a fun cameo early on. And of course, who can forget Christie Brinkley as a mysterious woman who becomes the object of Clark's desire? There's good location shooting, decent music, hilarious one-liners, and some truly outrageous moments here, all of which add up to an American comedy classic. Bottom line: don't miss it.