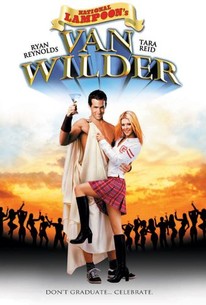 The "National Lampoon" franchise is resurrected for another politically incorrect collegiate romp with this R-rated gross-out sex comedy. National Lampoon's Van Wilder revolves around the exploits of its title character (Ryan Reynolds), a seventh-year senior who's made it his goal in life to help each and every Coolidge College undergrad succeed in life -- or at least in bed. Van's charmed life seems to have an expiration date, however; his father (Tim Matheson) has cut off his presumably vast allowance. Financial insecurity doesn't phase the big man on campus, and he soon starts up a lucrative cottage industry as a planner of high-priced campus blowouts. When an enterprising reporter from the college paper gets wind of Van's liberal interpretation of the school's code of conduct, it seems his gig is up -- unless, of course, he can charm the hard-edged Gwen (Tara Reid) into accepting his uniquely skewed world view. In addition to Matheson, Van Wilder features cameos from a number of '80s teen movie stalwarts, including Edie McClurg, Paul Gleason, and Erik Estrada.

Eric Estrada
as Himself

Albert Owens
as Another Doctor

The grossest, most disgusting humor imaginable.

Strangely likable and only about half as puerile as the average MTV reality series.

There's one saving grace: Reynolds may look a lot like NL's Chevy Chase, but, hey, he's actually quite likeable.

How this film received an R rating is beyond me. The gross factor alone is enough to warrant a new categorization by the MPAA.

I know it's harder to write good jokes than it is rotten ones, but based on what's displayed here, it doesn't seem like the effort was even made.

...I will admit to having chuckled at an Erik Estrada cameo...

Compare it to the recent Cameron Diaz-starring disaster The Sweetest Thing and you'll reckon it deserves an Oscar.

Van Wilder is a decent little teen comedy with a fairly decent cast. Some of the plot has been recycled from better films, but it is mildly entertaining, but in the long run is a very forgettable film that is not worth rewatching or demands multiple viewing. National Lampoon's films by the early 2000's were becoming mediocre to decent, but Van Wilder isn't a bad film, it just isn't a good film either. I thought it had its moments, but never goes above what it should have been. If you're going into this film expecting another Animal House, you'll sadly be mistaken. The film boasts some laughs here and there, and Ryan Reynolds, who I find to be not too bad in terms of acting, makes the film quite enjoyable. There was plenty of room for improvement and considering that National Lampoon has some terrific comedies under their belt, the material could definitely be better. I think that Van Wilder leaves a lot to be desired and it could have been rewritten a few times in order to really make it a stand out feature. Walt Becker's direction is pretty good considering the so-so material. Expect to be mildly entertained by this one; however don't expect anything memorable as this one just doesn't hold like others like Animal House and Porky's. But it does provide decent comedic material even if it's not that good of a movie. Van Wilder is worth seeing once for what it's worth. The film does leave a lot to be desired and you are left wanting more out of the movie.

An unabashed attempt to resurrect the Animal House franchise ... w/o the huevos rancheros to do so. Meh.

Flixter deletion? Not quite a classic, but Ryan Reynolds is in this role. Great plot and a lot of funny moments.

Ryan Reynolds carries this movie no doubt about it.