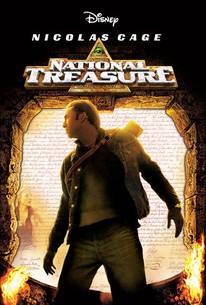 Critics Consensus: National Treasure is no treasure, but it's a fun ride for those who can forgive its highly improbable plot.

Critics Consensus: National Treasure is no treasure, but it's a fun ride for those who can forgive its highly improbable plot.

Critic Consensus: National Treasure is no treasure, but it's a fun ride for those who can forgive its highly improbable plot.

Benjamin Franklin Gates is a third generation treasure hunter. All his life, Gates has been searching for a treasure no one believed existed: amassed through the ages, moved across continents, to become the greatest treasure the world has ever known. Hidden by our Founding Fathers, they left clues to the Treasure's location right before our eyes--from our nation's birthplace, to the nation's capitol, to clues buried within the symbols on the dollar bill. Gates' life-long journey leads him to the last place anyone thought to look: a map hidden on the back of the Declaration of Independence. But what he thought was the final clue is only the beginning. Gates realizes in order to protect the world's greatest treasure, he must now do the unthinkable: steal the most revered, best guarded document in American history before it falls into the wrong hands. In a race against time, Gates must elude the authorities, stay one step ahead of his ruthless adversary, decipher the remaining clues and unlock the 2000 year-old mystery behind our greatest national treasure.

It is a definitely guilty pleasure, and 90 percent of the reason why can be summed up in two words: Nicolas Cage.

There might be too many inaccuracies in the plot, the mix of the past and the present is naive and at times downright silly but makes for fun viewing if you don't put your thinking caps on. The film has enough to keep you involved.

Historical adventure is a fun romp for tweens and up.

A mild holiday caper, for the wettest of afternoons.

This movie couldn't be more stale if it'd been dug up by archaeologists.

Works fairly well as slick, enjoyable hooey… in its general approach if not all particulars, this could represent a promising new approach in family entertainment.

Directed by Jon Turteltaub, National Treasure is nothing but a series of silly stunts and chases that just rush by.

While not the greatest film of the year, it is definitely one with a considerable amount of intrigue and action, not to mention some actual history lessons...

National Treasure is certainly no Indiana Jones but it's still fun a ride.

A serviceable actioner, with a playful comic tone and a series of reasonably thrilling set pieces.

National Treasure is so ridiculous, but I love it. I love it so much.

The film's infectious enthusiasm for American history-never mind that it's an incredibly fanciful version of that history-is a welcome respite from the hyper-self-conscious civic pride Hollywood usually displays.

Although technically the film wasn't very good (the acting was ok at best and the main plot details we pretty obvious) I had quite a lot of fun watching it. I was able to get into the story and it felt like I was going on this journey with them. I really liked the figuring out the riddles and the adventures and it seems this film is a guilty pleasure of mine. It's kind of a second rate Da Vinci Code/Angels and Demons.

This film is so much fun! I love History and the film is pretty exciting, and honestly, I can't complain with that. The script and acting is meh, but the movie is fun and characters are likable. I definitely recommend this one.