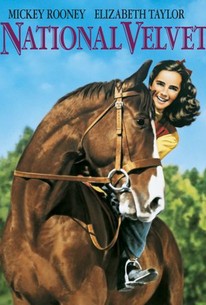 Critics Consensus: National Velvet makes the most of a breakout performance from Elizabeth Taylor, delivering a timeless family-friendly tearjerker that avoids straying into the sentimental.

Critics Consensus: National Velvet makes the most of a breakout performance from Elizabeth Taylor, delivering a timeless family-friendly tearjerker that avoids straying into the sentimental.

Critic Consensus: National Velvet makes the most of a breakout performance from Elizabeth Taylor, delivering a timeless family-friendly tearjerker that avoids straying into the sentimental.

Although National Velvet was the first starring role for 11-year-old Elizabeth Taylor, the early part of the film belongs to Mickey Rooney in the showier role of Mike Taylor, a headstrong English ex-jockey. Soured on life by a serious accident, Mike plans to steal from the country family that has taken him in, but his resolve is weakened by the kindness of young Velvet (Taylor). The two find a common bond in their love of horses. Velvet wins an "unbreakable" horse in a raffle, and enters the animal in the Grand National Sweepstakes. Though Mike is unable to ride the horse, he aids Velvet in her plan to disguise herself as a jockey; she wins the race...but the story isn't over quite yet. Co-starring as Velvet's mother is Anne Revere, who won a Best Supporting Actress Oscar for her performance. National Velvet is based on the novel by Enid Bagnold. ~ Hal Erickson, Rovi

Arthur Treacher
as Man with Umbrella

Olaf Hytten
as Villager
View All

Pandro Berman, the producer, and Clarence Brown, the director, have made it into a conservatively exciting and engaging film whose chief virtue is its acting, especially a letter-perfect, beautifully felt performance by Mickey Rooney as the jockey.

National Velvet is not merely sure to delight children and the child in most adults; it is also an interesting psychological study of hysterical obsession, conversion mania, preadolescent sexuality.

A good movie for kids and armchair Freudians.

This is a charmer for boys and girls of all ages, with a captivating performance from the young Liz Taylor as Velvet.

A good bet for a family night in front of the TV.

See this movie for little Elizabeth Taylor's precocious, bravura performance. Her face is alive with refreshing joy; her voice has the breathlessness of wanting to embrace the whole wondrous world, but having too little time.

One of the greatest tear-jerkers that MGM ever made: a warm-hearted piece of escapism.

Donald Crisp and Anne Revere save this treacly family drama from choking on its own sentimentality.

I think that [Elizabeth Taylor] and the picture are wonderful.

There is a curiosity in seeing Liz Taylor as a child actor and Mickey Rooney is always a delight but this film is pure kids' play. Nothing terribly memorable.

A giant cup full of feel good. Mickey Rooney and Elizabeth Taylor, two of the greatest child actors to grace the silver screen, are put together to make one of the more beautiful of trainer-athlete pairings on screen. Anne Revere as the incomparable Mrs. Brown gained an Oscar for her role, and rightly so. Watch with family, because that's what thje movie's about. That and the Pie.

A warm and fuzzy family film about a young girl's love of her horse and her pursuit of a win at the Grand Nationals horse race. This stars an incredibly beautiful 12-year old Elizabeth Taylor, Mickey Rooney, and Donald Crisp as the curmudgeonly but lovable father, Mr. Brown. There are some scenes that are TOO coincidental, such as how Velvet (Taylor) acquires the horse to begin with, and how the results of the race are decided. Why take the long way around? We know she's going to win the horse or we'd have no movie. Why tiptoe around the obvious? The race itself, consisting of jumps over hedges and ditches, is breathtaking. A number of horses don't complete the jumps, jockeys are thrown or fall from their horses, and the recording of this event makes you feel you're actually there. Kind of a Ben-Hur feel to it in some ways. Mickey Rooney was a hugely talented actor as a child, and he doesn't disappoint here. He is by turns sweet or bossy or calculating or afraid. He has a wonderful series of scenes with character actor Arthur Treacher as they watch the race progress. I've always found Elizabeth Taylor's early performances a little too saccharine for my tastes, but she has a glow in her face and her voice that you can't help but be drawn to. Small children, especially horse-obsessed little girls, will like this, and it's good enough that adults won't be pulling their hair out while watching it. The main theme at the time was probably about going after your dreams, and it is that. But Velvet's talk with her mother (Anne Revere) about those dreams also holds a feminist message -- that women can do anything men can do. What better message could there be for little girls?