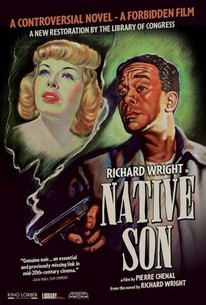 African-American playwright Richard Wright's 1940 novel Native Son was too explosive for any Hollywood studio in 1951. However, an enterprising Argentine filmmaking firm was able to attain American backing (and a few location shots filmed in Chicago) for a cheap but satisfying cinemazation of the novel. Author Wright himself is cast as Bigger Thomas, a young Chicago black man who chafes at the thought of never being considered an equal in a white-dominated society. Bigger gets a job as chauffeur for a wealthy white family, who hope in their own naïve fashion to help Thomas graduate from the ghetto. The family's daughter (Jean Wallace) talks Bigger into driving her to a labor rally so that she can rendezvous with her "radical" boy friend (in the novel, the boy was an avowed Marxist, but this aspect was toned down for the politically volatile early 1950s). On the way home, Bigger misinterprets the girl's kindnesses towards him as being sexually motivated. Later on, Bigger drives the girl home after she's been on a drunken binge. She awakens and screams at him; the confused Bigger, certain that he'll be accused of attempted rape, accidentally kills the girl. He hides the body, fearing that discovery of his crime will prompt a lynching. The girl's boyfriend is accused of kidnapping her, a suspicion that Bigger has a hand in fomenting. Once he is found out, Bigger takes it on the lam with his ghetto girlfriend (Gloria Madison). Partly out of rage over his station in life, and partly out of confusion over the series of events that have led to his current plight, Bigger kills again just before the cops close in. Richard Wright's thesis was that, while Bigger Thomas was certainly responsible for his crimes, his mixed-up behavior was a by-product of white society's ongoing suppression of blacks. This isn't quite as clear-cut in the film version of Native Son as it was in the novel (or the stage play, which was presented by Orson Welles' Mercury Theatre in 1941). ~ Hal Erickson, Rovi

Cecile Lezard
as Peggy
View All

Not a perfect film, but the movie is far more than a curiosity. The cinematography from Antonio Merayo is top-notch, and Wright's writing is as brutal as it is blunt.

Why is it essential then? Every now and hen you get a glimpse of the deeper horrors of the book, even if they are just passing allusions to what the novel insists is omnipresent

This new "most complete restoration" has just enough film noir fury about it to hint at the classic it might have been, and plenty of B-movie pop to it even as it is.

Limited budget, black and white melodramatic pacing and scripting, awkward direction and inferior acting are what contribute to its shortcomings as pure film.

A mediocre 'man-on-the-run' crime drama without any twists or likable three-dimensional characters to keep your interest.

There are no featured reviews for Native Son at this time.