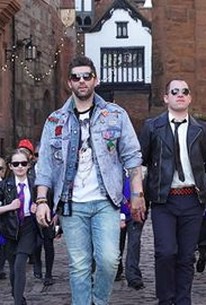 We're back with the kids from St Bernadette's Primary School in Coventry as the staff and students audition for a coveted place in a spectacular rock musical competition. With the unique feel-good charm of the original film, Celia Imrie reprises her role as Headmistress Mrs Keen, starring alongside Meera Syal, Ruth Jones, Anna Chancellor, Hugh Dennis and Helen George. The film also introduces Simon Lipkin as Jerry Poppy and Craig Revel Horwood as the ruthless show director Emmanuel Cavendish. This Christmas, NATIVITY ROCKS!

Gary Davis
as Simon
View All

In terms of it being a family movie, as an elderly family member, it doesn't work for me.

Here is a festive poke in the eye for everyone who doubted the Nativity franchise had a fourth instalment in it, not least those of us who have yet to be persuaded it even had one.

Marginally more tolerable than the last one.

Even by these undemanding standards you feel that Nativity Rocks! is taking the mickey.

If you don't have a seasonal school play or a local panto to attend in the coming weeks, and you're weirdly desperate for something to fill the gap, then here you go.

Craig Revel Horwood plays an impresario who wants to make it all about Herod, which is tasteless but quite funny.

This is aimed at 7 to 9 year old kids who like middle of the road rock music and poo jokes, and brings bad tidings for anyone in the cinema who falls outside that demographic.

There are no featured audience reviews yet. Click the link below to see what others say about Nativity Rocks!!