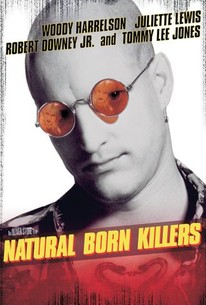 Critics Consensus: Natural Born Killers explodes off the screen with style, but its satire is too blunt to offer any fresh insight into celebrity or crime -- pummeling the audience with depravity until the effect becomes deadening.

Critics Consensus: Natural Born Killers explodes off the screen with style, but its satire is too blunt to offer any fresh insight into celebrity or crime -- pummeling the audience with depravity until the effect becomes deadening.

Critic Consensus: Natural Born Killers explodes off the screen with style, but its satire is too blunt to offer any fresh insight into celebrity or crime -- pummeling the audience with depravity until the effect becomes deadening.

A frenetic, bloody look at mass murder and the mass media, director Oliver Stone's extremely controversial film divided critics and audiences with its mixture of over-the-top violence and bitter cultural satire. At the center of the film, written by Stone and Quentin Tarantino, among others, are Mickey (Woody Harrelson) and Mallory (Juliette Lewis), a young couple united by their desire for each other and their common love of violence. Together, they embark on a record-breaking, exceptionally gory killing spree that captivates the sensation-hungry tabloid media. Their fame is ensured by one newsman, Wayne Gale (Robert Downey, Jr.), who reports on Mickey and Mallory for his show, American Maniacs. Even the duo's eventual capture by the police only increases their notoriety, as Gale develops a plan for a Super Bowl Sunday interview that Mickey and Mallory twist to their own advantage. Visually overwhelming, Robert Richardson's hyperkinetic cinematography switches between documentary-style black-and-white, surveillance video, garishly colored psychedelia, and even animation in a rapid-fire fashion that mirrors the psychosis of the killers and the media-saturated culture that makes them popular heroes. The film's extreme violence -- numerous edits were required to win an R rating -- became a subject of debate, as some critics asserted that the film irresponsibly glorified its murderers and blamed the filmmakers for potentially inciting copy-cat killings. Defenders argued that the film attacks media obsession with violence and satirizes a sensationalistic, celebrity-obsessed society. Certain to provoke discussion, Natural Born Killers will thoroughly alienate many viewers with its shock tactics, chaotic approach, and disturbing subject matter, while others will value the combination of technical virtuosity and dark commentary on the modern American landscape. ~ Judd Blaise, Rovi

The movie is enlightening, not because it transmits new information, but in the way that movies enlighten, through a synergy of images and rhythms that makes us sense the world in a new way.

Natural Born Killers finds Stone throwing everything against the wall to see what sticks.

As a satirist, [Stone's] an elephant ballerina.

This is one of my all time favorite movies, and it put Oliver Stone on my list of 'Best Directors Ever,' right along with Stanley [Kubrick].

Berserk from the outset, Natural Born Killers lunges for our collective viscera in its opening sequence (surely one of the most brilliant establishing sequences of all time) and never lets go for the next two hours.

Stone...doesn't know the meaning of moderation or subtlety, and opts instead for something that is excessive and self-indulgent. It's as if he wants to shout out the statement: 'Look at what I can do! I'm an artist!'

Natural Born Killers offers glimpses of Oliver Stone at his best and worst.

A visionary film because it sees the truth of our society and where we are headed.

More than 25 years after it was released, this poor excuse of a movie remains pretty annoying. [Full review in Spanish].

They are anti-heroes of the tallest order, yet some of the most riveting and dementedly sympathetic characters ever created

It's an interminable farrago of slogans and pyrotechnics. It has the scathing exaggeration of satire, without the point and bite which make us recognise the real world. It flies off into its own realm of sadistic fantasy.

It can easily be said that "Natural Born Killers" ranks among the worst films in Oliver Stone's filmography. It's an incompetently-made attempt at drilling home an incredibly simplistic point that anyone can learn from turning on the news.

This movie may be audacious, yes, but there is no way it could be more obvious, proving to be a self-indulgent parody that is more irritating than clever, bombarding us with an excessive amount of visual hysteria and basically calling subtlety an overrated bitch.

One of the most controversial films of the past twenty years, "Natural Born Killers" incited a frothy debate on the role of violence in mass media, and how it affects young children. The actual controversy surrounding the film included a lawsuit that stated that the film had incited violence by showing satirized depictions of violence, going against the actual point of the film. The original screenplay was by Quentin Tarantino, though later bought and heavily changed by Oliver Stone and his collaborators, though the inspiration is still very clear. The film stars Woody Harrelson and Juliet Lewis as mass murderers who are also a couple, the story taking heavily from the exploits of Starkweather, the beating of Rodney King, and sensationalized news coverage. Their story, while seeming out of this world strange, is memorable for its proximity to true American crime stories, and the media coverage that did surround them. Robert Downey Jr. plays an Australian reporter with a crime TV show (a la Geraldo Rivera) who gets way too into the story he is reporting on, and finds it all very exciting rather than horrifying. It's a scathing indictment of the media, and their inability to show murder and violence without a bit of excitement, maybe even envy. There's this gross, almost pseudo-erotic tendency that crime shows have towards their subject matter. Everything has to be pulse thumping and exploitative, even though these are real people dying. Besides its core message, this film is also amazing for its shocking use of parody, sex, and violence. Though the events in the film can be the basis for an action film, it's framed so that you feel queasy, that you see the grotesque of society while also seeing inside the minds of these killers. This film is riveting, gross, and bloody, while also being insightful.

I've seen it but I've never REALLY seen it.

A thrill ride of emotion and action. Just great flick with over the top acting from Harrelson.