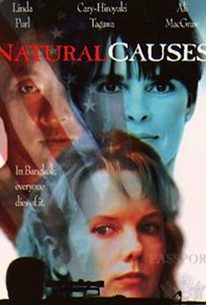 In this political thriller set in Bangkok, a young woman finds herself drawn into a scheme designed to assassinate Henry Kissinger, the former Secretary of State. The film offers wonderful views of the Thai city. The film opens with the death of American Rachel McCarthy, who is murdered in her limo as she travels to the airport to meet her daughter Jessie whom she has not seen in over a decade. Jessie, a bit of an innocent, goes to her mother's estate and discovers that her mother had been part of an international plot. Vietnamese refugees were involved. The point of the conspiracy is to sabotage a treaty between the U.S. and Vietnam. Along the way she encounters many fascinating characters. The most important are U.S state Dept official, Fran Jakes, agent Michael Murphy with the CIA, and Major Somchai, Thai detective.

Will Patton
as Michael

Tim Thomerson
as The Westerner

There are no featured reviews for Natural Causes at this time.