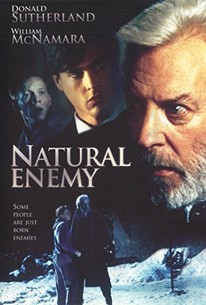 In this low-budget thriller, which was released directly to video, Donald Sutherland stars as a Ted Robards, a small-time stockbroker who allows promising young Harvard alumnus Jeremy (William McNamara) to move into his home and help run his firm. While pretending to build up the business, Jeremy secretly dismantles it from within, all the while planning to wreak havoc of a more personal nature on Ted; his son Chris; and especially his pregnant new wife, Sandy (Lesley Ann Warren). Flashbacks reveal Jeremy's tortured upbringing and the killing streak it engendered. As things turn out, however, the pampered, beautiful Sandy has some devastating secrets of her own -- one of which may explain why her husband's protégé is out to get her. Natural Enemy also features Joe Pantoliano and Wayne's World starlet Tia Carrere. McNamara previously played another serial killer in 1995's Copycat.

There are no critic reviews yet for Natural Enemy. Keep checking Rotten Tomatoes for updates!

There are no featured reviews for Natural Enemy at this time.