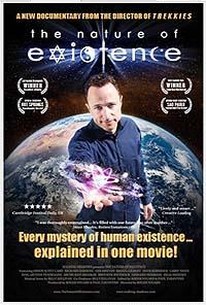 The Nature of Existence Photos

What are the answers to the great questions of life, and who is certain they know the truth others have been struggling to find for centuries? Filmmaker Roger Nygard, after examining the lives of Star Trek fans and used car salesmen, profiles a number of thinkers both great and ordinary in this documentary. For The Nature of Existence, Nygard prepared a questionnaire with 85 weighty philosophical questions, ranging from "Why do we exist?" and "Do we have free will?" to "Who created God?" and "Is there a moral yardstick that applies to all cultures?" Nygard then set out to interview as many people who might have something to say about his list of imponderables as possible, ranging from biologist and author Richard Dawkins, physicist and String Theory creator Leonard Susskind, and Indian spiritual leader Sri Sri Ravi Shankar to a born-again Christian wrestler, the director of The Empire Strikes Back, a pair of self-proclaimed druids, and a pizza cook. The result is a witty, thought-provoking, and often surprising study in the greatest mysteries of life. The Nature of Existence was an official selection at the 2009 Cinequest Film Festival.

News & Interviews for The Nature of Existence

View All The Nature of Existence News

Critic Reviews for The Nature of Existence

Certainly there are filmgoers who enjoy this kind of noncommittal metaphysical quest. I am not one of them. It makes me think that the filmmaker is more interested in showing us his vacation slides instead of sharing any real insights.

While it will strike some as smug and others as sincere, pic certainly has a feel-good tone and playful attitude.

As a conversation starter ... it's an affable appetizer.

His film is no more profound than its forerunners, but it's quicker, funnier and less pretentious.

A journey that prizes intellectual search over simplistic solutions, and if you come to it with a similar attitude you should enjoy ambling along.

It's overly, apologetically polite in its efforts to cover all the bases.

A fascinating film that shows us just how crazy we are for even trying to answer the big questions.

The problem is that Nygard is not a showman (like Moore) and the journey quickly loses its appeal.

A smart, engrossing, and entertaining crash course in the study of What It All Means.

An enlightening, provocative and captivating spiritual journey well worth taking.

Audience Reviews for The Nature of Existence

There are no featured audience reviews yet. Click the link below to see what others say about The Nature of Existence!

The Nature of Existence Quotes