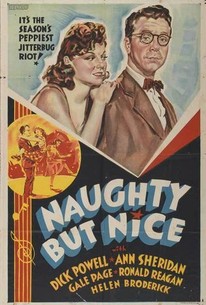 It's Swing Music vs. the Classics in the easy-to-take Warners tunefest Naughty But Nice. Dick Powell dons the obligatory spectacles as a staid music professor Hardwick, who harbors a desire to become a songwriter. With the help of aspiring lyricist Linda McKay (Gale Page), Hardwick pens a little ditty that, through a fluke, becomes a smash hit. Not entirely prepared for show-business success, Hardwick falls into the clutches of predatory vocalist Zelda Manion (Ann Sheridan), leaving poor Linda in the lurch-at least until the last reel. Ronald Reagan breezes through one of his then-typical wiseguy supporting roles, while ZaSu Pitts, Vera Lewis and Elizabeth Dunne are likewise typecast as Hardwick's maiden aunts (conversely, the Professor's other aunt, played by Helen Broderick, is a real hep-cat). Virtually all the Harry Warren/Johnny Mercer songs in Naughty but Nice have been adapted from the works of such past masters as Mozart, Bach and Wagner-and old device, but one which works beautifully here. ~ Hal Erickson, Rovi

Tom Dugan
as Man with Seals

William B. Davidson
as Sam Hudson

John Harron
as Clerk
View All

Critic Reviews for Naughty But Nice

There are no critic reviews yet for Naughty But Nice. Keep checking Rotten Tomatoes for updates!

There are no featured reviews for Naughty But Nice at this time.