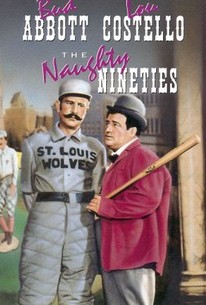 Abbott and Costello's The Naughty Nineties offers a million laughs and a nickel's worth of plot. Most of the film takes place aboard a 19th century showboat, owned by kindly Captain Sam (Henry Travers). Bud Abbott plays the showboat's leading man Dexter Broadhurst, while Lou Costello is handyman Sebastian Dinwiddie. A group of slick gamblers (Alan Curtis, Rita Johnson and Joe Sawyer) cheat Captain Sam out of his boat, turning the place into a floating gambling palace, but Dexter and Sebastian foil the villains and save the day. The film is a virtual encyclopedia of wheezy but still hilarious comedy routines, many of them devised by veteran Laurel & Hardy and Three Stooges gagman Felix Adler. The film's highlight is a full-length performance of Abbott and Costello's verbal classic "Who's on First?"-and if one listens very closely, one can hear the cameramen and crew members laughing!

Jack Worth
as Croupier

Edward Gargan
as Baxter the Bartender

Critic Reviews for The Naughty Nineties

Pretty dismal, but containing the 'Who's on first?' routine.

Audience Reviews for The Naughty Nineties

There are no featured audience reviews yet. Click the link below to see what others say about The Naughty Nineties!