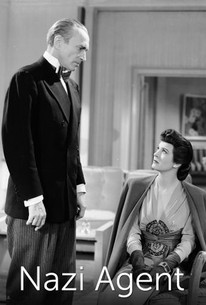 This Irving Asher production was that rarity, a genuine B-movie from posh MGM. Set in a pre-Pearl Harbor United States, Nazi Agent starred real-life Hitler refugee Conrad Veidt as identical twins, one a timid stamp collector and rare book store owner, the other the Nazi consul. The evil Veidt is killed during an argument between the two and the good Veidt shaves his beard in order to take his brother's place as head of a Nazi spy ring. He manages to quell the group's attempts to sabotage allied shipping routes before being exposed by, of all things, a pet canary. In order to save the life of a defecting fifth columnist (Ann Ayars), Veidt agrees to return to Germany, gaining strength for the upcoming ordeal in the Vaterland as his ship passes the Statue of Liberty. Relatively fast-paced and engrossing most of the way, Nazi Agent was the feature-film debut of director Jules Dassin, formerly of MGM's short subject department. Dassin went on to direct several groundbreaking crime dramas for Universal before finding himself blacklisted during the Hollywood "witch hunts." He continued his career in Europe, helming such genuine classics as Never on Sunday (1959). A lyric soprano, Ann Ayars spent the mostly unrewarding years between 1941 and 1943 in MGM potboilers before leaving films in favor of the New York City Opera.

Harry B. Stafford
as Elderly Man

There are no featured reviews for Nazi Agent (Salute to Courage) at this time.