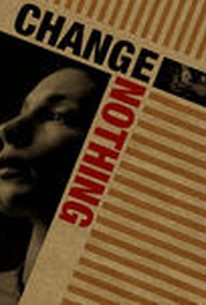 Jeanne Balibar is a gifted French actress who has worked with a number of leading international filmmakers, including Jacques Rivette, Diane Kurys, Olivier Assayas and Raoul Ruiz, and was introduced to English-speaking audiences in Michael Winterbottom's thriller Code 46. But in addition to acting, Balibar is also a talented singer, and released her first album, Paramour in 2003. Filmmaker Pedro Costa offers an intimate look at Balibar the musician in his documentary Ne Change Rien, which offers a behind the scenes portrait as Balibar and Rodolphe Burger put together material for her next album while she rehearses for a role in the operetta "La Perichole" by Jacques Offenbach. Costa follows Balibar and Burger from recording studios in France to performance venues in Japan as the singer and actress follows her muse and allows us to witness the creative process of a multi-faceted artist. Ne Change Rien was an official selection at the 2009 Cannes Film Festival, where it was screened as part of the Directors Fortnight program. ~ Mark Deming, Rovi

A film dreamily in love with the equally inspiring and tedious work of art.

Balibar's dreamy voice (I'm reminded of Billie Holiday) is complemented by Costa's hypnotic camera work. The result is a visual and aural delight.

Ne Change Rien is about the work, the mix of inspiration and hard labor that performers draw on from moment to moment, an alchemical event that cinema rarely shows.

Call it the Passion of Jeanne: Accompanied for much of the movie by a single reverb-heavy guitar and a snare drum, Balibar demonstrates a carefully calibrated lack of affect and a voice as smoky as a carton of Gitanes.

It's a ravishing bit of pure cinema, and a litmus test for the viewer's capacity to withstand the director's exacting formalism.

Shot in shadowy black-and-white, its first 20 minutes feature Balibar singing a song on stage portentously called Torture which was what it was like to listen to her.

as much a startling study of musical composition as it is a stoic, sublime ode to cinema love.

There are no featured reviews for Ne change rien at this time.