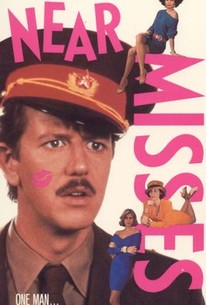 A lusty executive for a high-tech company tries to juggle his life between two disparate wives and his mistress. He is also in the Army Reserves and it is while serving his annual two weeks that he gets into big trouble. Actually, he is not actually serving; instead, he convinced his buddy to pretend to be him and go in his stead. The problems begin when the stand-in is arrested for being a spy.

Vernon Dobtcheff
as Ivan
View All

Critic Reviews for Near Mrs.

There are no critic reviews yet for Near Mrs.. Keep checking Rotten Tomatoes for updates!

There are no featured reviews for Near Mrs. at this time.