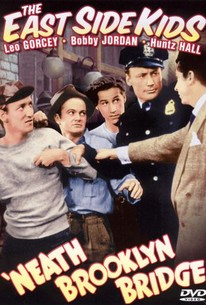 The East Side Kids, featuring Leo Gorcey, Gabriel Dell and Huntz Hall, star in this spirited blend of action and comedy. The kids come to the rescue of a hysterical young girl who is discovered in the apartment with a murdered man. Convinced she's not the killer, the guys hide her as they comb the neighborhood for the real murderer. However, one of the kids made the mistake of picking up the baseball bat that appears to be the murder weapon, and now the fingerprints could point the police investigation at them. 'Neath The Brooklyn Bridge also features Dave O'Brien (best known for his eccentric performance in Reefer Madness) and Noah Beery Jr..

There are no critic reviews yet for 'Neath Brooklyn Bridge. Keep checking Rotten Tomatoes for updates!

There are no featured reviews for 'Neath Brooklyn Bridge at this time.