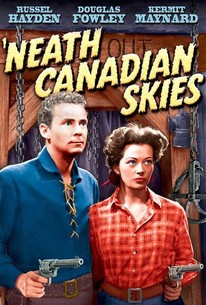 Neath The Canadian Skies was one of a quartet of 45-minute "northerns", all produced by Golden Gate Productions and released by Screen Guild. Russell Hayden stars as a stalwart Mountie who poses as a criminal, the better to solve the murder of a prospector. Allegedly based on a story by James Oliver Curwood, the film ends rather abruptly; a second off-length film, North of the Border, ties up some of the loose plot ends of Neath The Canadian Skies, suggesting that these two short films were originally one long one. Confirming this suspicion is the fact that the supporting casts of both films (Inez Cooper, Douglas Fowley, I. Stanford Jolley etc.) were identical. A second pair of 45-minuters starring Russell Hayden, Where the North Begins and Trail of the Mounties, showed up in 1947.

There are no critic reviews yet for 'Neath Canadian Skies. Keep checking Rotten Tomatoes for updates!

There are no featured reviews for 'Neath Canadian Skies at this time.