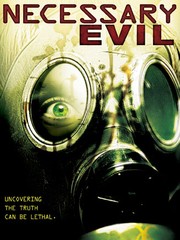 Andrew J
April 27, 2011
About everything about this movie was bad.

Brian S
March 2, 2011
Necessary Evil is an unnecessary movie unless you feel it has been much too long since someone has insulted your intelligence. I don't mean insulted it in the sense of making an unbelievably bad movie, which Necessary Evil certainly is. I mean insulted in the sense that the people who made it actually felt it necessary to tell the viewer that he is an idiot *literally.* Let me put it briefly; the film centers around an evil pharmaceutical firm that's making a drug called Reficul. As soon as you see that word, you're smart enough to spell it backwards and get Lucifer, right? Well, the director and/or writers don't think so. They not only feel the need to have the narrator/main villain tell us so at the end of this crapfest (The narrator actually says, "I am Reciful spelled backward." That's in the script!), but quickly follows it up by LITERALLY saying, "Get it? No, of course you don't. Go back to sleep."

See, you're so stupid that even AFTER someone tells your that Reficul spelled backwards is Lucifer, you're too stupid to figure out what Lucifer means. See how stupid you are? Stupid you. Here, let me give you the finger and then explain to you what it means.

Sitting through 87 minutes of this garbage is like walking through a museum of cliches. There's not an original scene or line of dialogue in the whole film. At one point, the heroine sits in a jail cell and rattles off cliches to a cop. Actual line of dialogue: "So much for 'to serve and protect.' I'm too much woman for you anyhow. Have a nice day, officer." Ugh. Every cliche and stereotype you have ever seen has been collected in one terrible place, like a bag of unwanted kittens ready to be tossed into a river. In this case, I suggest letting it be tossed. There is no need whatsoever for Necessary Evil.

John C
½ November 24, 2010
More like an old 80s horror flick, with effects and acting to match. Even Lance Henriksen is over the top. This one just misses out on having something to make it worth seeing more than once. They could have played it more for horror instead of for cheese. The creature effects could have been a lot better. All in all, this one comes up short with bad acting all around. Lance Henriksen and the storyline give this one the third star, but I would rather give it two and a half.

Adrian F
½ September 18, 2010
necessary evil is a terrible low budget horror film that is not scary nor thrilling. i wanted to see some more blood and violence but unfortunately there was none. its a poorly directed film that tries way to hard to be scary and good and in the end its pointless and not scary. the acting is bad, the plot is bad, the directing is bad, everything about this film is bad, including its title.

Gregory W
May 9, 2010
very low budget but what can i say i really liked this B-movie.