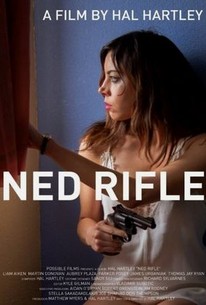 Critics Consensus: Ned Rifle serves as a satisfying conclusion to Hal Hartley's "Henry Fool" trilogy - and one of the strongest late-period works from a distinguished filmography.

Critics Consensus: Ned Rifle serves as a satisfying conclusion to Hal Hartley's "Henry Fool" trilogy - and one of the strongest late-period works from a distinguished filmography.

Critic Consensus: Ned Rifle serves as a satisfying conclusion to Hal Hartley's "Henry Fool" trilogy - and one of the strongest late-period works from a distinguished filmography.

Henry Fool and Fay Grim's son Ned sets out to find and kill his father for destroying his mother's life. But his aims are frustrated by the troublesome, sexy, and hilarious Susan, whose connection to Henry predates even his arrival in the lives of the Grim family. A funny, sad, and sexy adventure, Ned Rifle is an intellectually stimulating and compassionate satire. (C) Possible Films

Seemingly everyone here, viewer included, is on a Fool's errand in trying to pin down the ever-fugitive Henry... which makes this most elusive of characters a perfect figure for a trilogy whose own significance is difficult to capture.

Hartley is at his Hartleyest here, meaning, among other things, that a fair chunk of the dialogue sounds like a pronouncement, aimed as much at the viewer as it is at another character.

At its worst, "Ned Rifle" is a self-involved movie about self-involved people. When it clicks, though, we're in a pared-down moral universe that carries unsettling echoes of our own.

The movie doesn't exactly go anywhere. Or rather, it dithers around, and then, just as things start to get interesting, it ends.

[It] might not sound entertaining, yet when the writer-director is on his game, as he is in "Ned Rifle," the effect is bizarre black comedy that is designed to set you thinking about what his satire is really saying.

It's as close to an adding-up as can be expected from any thrifty trilogy spread out over three decades, but surely a testament to enduring indie integrity.

As much as I generally enjoy revisiting Hartley's world, there's a touch of half-baked off-off-Broadway theater about Ned Rifle.

The movie should resonate for fans, as it's filled to the brim with Hartley's signature dry and carefully crafted dialogue.

Hartley's dialogue has a crisp, sardonic, back-and-forth quality, as if characters were bargaining over information and logic.

Hartley is back with another unusual but unforgettable film. A great satire.

Ned(Liam Aiken), having just turned 18, has decided to leave witness protection and head out into the world, seeking to find his mysterious father, Henry Fool(Thomas Jay Ryan), but not without a present from Clair(Melissa Bithorn) first. Ned's first stop is to visit his mother(Parker Posey) in jail, before paying a visit to Simon Grim(James Urbaniak), his uncle and Nobel laureate. And it is there that Ned encounters Susan(Aubrey Plaza), Simon's stalker, who is also looking for Henry. Look, I've been as tough on Hal Hartley recently as much as anyone, but I think with his latest film "Ned Rifle," he regains some of his past form, with his deadpan style working in fits and bursts. And of course, it helps that he exchanged Aubrey Plaza for Parker Posey, with Martin Donovan always a welcome presence, no matter how token the appearance.(And it has been a long time since Karen Sillas has been in anything.) At the same time, this concluding installment of Hartley's Woodside Trilogy could be considered little more than an extended epilogue, if not for bringing things full circle, as Ned faces all sorts of temptation in his journey to adulthood. Full disclosure: I did contribute to this film's Kickstarter campaign, for old time's sake, as much as any other reason.