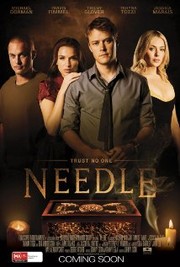 Ian M
September 6, 2016
Hot Aussie cast, pretty juicy, a bit silly, and badly acted. An enjoyable bit of horror fluff that starts to get a bit dull and I drifted off halfway through. The killer is a complete twot. Their reasoning blows in my eyes.

Rotimer J
½ January 2, 2016
Nothing new and nothing exciting, but an easy enough watch.

bill s
½ June 15, 2015
More thriller than horror but just enough thrills to warrant a one time watch....just do not over think it.

Brian C
January 6, 2015
Great story mixing voodoo with Victorian artifacts and the usual teenage slasher motif. Needle is lots of fun. There are some interesting characters that aren't the usual cardboard cutouts, lots of cool gore, and a macabre machine from the Victorian era. The serial killer is interesting, and not the usual kind that one would have expected.

Mark G
½ December 31, 2013
Doesn't do anything to make itself stand out and even though there's nothing glaringly bad about it, it fails to entertain.

Hugo G
½ September 24, 2013
This horror movie has a familiar setting about teens getting slaughter one by one, but this movie adds a little twist by getting in the picture voodoo. Sadly, the story is badly executed and everything seems to happen so fast, that there's not even time to process any scene nor let the characters breath for a second or just act like they weren't on a movie. Still, the make-up effects were really good as well as some of the death scenes. But also, it had some good scares here and there.
-September 22, 2013-

I Enjoyed It..Probably Not Completely Original But Close ...I've Never Seen Something Like It!

Overall worth a Rent/Borrow Or Watch Off Netflix.. Don't Think Its Really Worth A Buy Though!

intuciic .
April 24, 2013
this was nice and interesting horror movie!

Paul N
January 31, 2013
This film is OK, intriguing story fairly well played out, I think this film came out a bit too late to manage to grab attention from all those Hell Raiser and mystery object movie buffs and so falls flat on its face with no audience who wants to watch it. That said it is part of my DVD collection and I'm sure I'll watch it again in maybe 30 years once I have forgotten it.

David L
January 8, 2013
Good, but could have been so much better! When a teenage boy gets left with an antique artefact following his dads death, little does he know what power it possesses, until it's too late. This half a million dollar contraption is actually a device made for enforcing revenge in the most fatal of ways! All the owner has to do is insert a picture of the desired victim, wind the crank up, and voila..........a voodoo doll is created which can be tormented as much as one likes, with the sequence of torture being mirrored on the actual being it has been intended for! Unsurprisingly enough, the film then revolves around the boy discovering who is inflicting all these subsequent deaths of his friends having had the contraption stolen from his room! Although I'm not a big fan of voodoo and witchcraft, the concept is quite basic and easy to follow but the potential of this films entertainment value is not maximised by a long way. Instead of devising innovative and cringe worthy ways of making each of the victims suffer I.e. Final Destination style, we just witness the same death one after the other, which is a bit of a waste. The twist ending I did not see coming, but that's more me being thick than it being original, as it's one that anyone could have seen coming. Having said that, the storyline did have a nice flow to it, it's only once you reach the end that you feel particularly uninspired and are left with a feeling of what could have been!

Cylus O
½ October 14, 2012
A person seeking revenge uses a voodoo box to kill people. How I wish I had that voodoo box to enact some revenge of my own for wasting my time.

Super Reviewer
Adam M
April 22, 2012
Teen-type horror thats not as shit as i thought it'd be. A student gets left some random old machine and doesn't know what to do with it but it seems to have a dodgy past so when it gets stolen you know whats going to happen! Yes, its an ancient device used for killing people in horrible ways and now its being used to kill a group of friends at the students uni. Although the set ups familiar the use of machine type shit isn't so Needle deserves credit for that. Plus theres some gore and a few hot women including a couple of lesbians so as far as teen horrors go, Needle's not bad.

jen b
April 17, 2012
i thought it was gonna be fuckin lame but surprising was better than i thought.

Billy B
March 18, 2012
A man inherits a unique box after his fathers death, and soon after his friends start to die, one-by-one.

This is another shining example of why Australian horror films just don't work. Like Dying Breed, Black Water and the worst horror film i've ever seen, Prey, Needle has alot of potential to do big things with it's premise, but it fails to really have an edge. The entire movie was just predictable, although the twist ending I didn't see coming until about half and hour before it was revealed. Whilst it had some great effects and visuals, the movie never really took off and left me bored out of my brain after a while. The death scenes were definately the best part of the movie, but they couldn't save it.

The plot is simple enough, but when writers don't expand simple plots they have a generic horror film that will never stand the test of time. These days horror films need something unique going for them, but the whole voodoo killer gets old. The added value of having a lesbian couple was clearly something they used in the marketing to get people interested, which really says it all.

The acting was below average. Jessica Marais, or more commonly known as Rachel from Packed to the Rafters, is just a shit actress in general. How people love her is beyond me. She's as plain as an Arrowroot biscuit, although towards the end she did get a tad better. Michael Dorman was almost as generic.

Overall Needle is another boring, predictable Australian horror flicks that lacks any real suspense. My rating is 2/5.

Cassandra M
January 21, 2012
Amazing film! Hollywood-inspired cinematography and a thrilling plot line make this one film not to miss.
Page 1 of 3