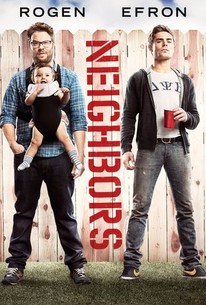 Seth Rogen, Zac Efron and Rose Byrne lead the cast of Neighbors, a comedy about a young couple suffering from arrested development who are forced to live next to a fraternity house after the birth of their newborn baby. Neighbors is directed by Nick Stoller (Forgetting Sarah Marshall, Get Him to the Greek). (c) Universal

Liz Cackowski
as Wendy the Realtor

Jesse Heiman
as The Babysitter

Zoey Vargas
as Stella
View All

Byrne walks away with the film by making Kelly a well-rounded, conflicted person, rather than the film's fun cop who has to tell everyone the boring truth.

Most of the non-leads are underdrawn but laughs keep coming, only just bouncing this up from three stars to four.

Banal riffs on pop culture themes vie for laughs with depressing jokes about tits, balls and dicks. The low-point has Byrne (who I hope was well paid) being "milked" by Rogen. Whatever happened to comedy?

The young married couple does something cruel, and then the idiot frat guys next door respond, and back and forth it goes. I laughed, but not uproariously and not often enough.

It's Apatow without the Apatow, all ornaments and no tree.

The raunchy gags might not stop but Neighbors is a laugh riot.

Not so much a story as it is an idea played out in a series of wild gags, but good performances and some unexpected heart make it a cut above the usual frat boy fare.

Presents a talented cast and a premise brimming with potential, but manages to squander every opportunity for laughs.

The film's true revelation may very well be Rose Byrne.

"Neighbors" is raucous, rowdy, and funny as hell, but it still manages to have heart once you strip away the foul-mouthed layers.

An entertaining examination of growing up vs. growing old and how neither is necessarily the right thing to do.

A harmless Apatowian comedy that works well in its first half yet fails precisely when it tries to offer a deeper, artificial meaning to its story - which is reflected in how Dave Franco suddenly turns into a smart frat boy as soon as he is required by the plot to be the voice of reason.

Say what you will about Seth Rogen lead comedies, but of all the comedies coming out today, his are among the best. When the first trailer for the film "Neighbors" dropped, many people shrugged it off as a movie that would be a fine watch with a bunch of friends. While the film is exactly that, it is much better than fine. In this very surprising film, director Nicholas Stoller (of "Forgetting Sarah Marshall" and "Get Him to the Greek" fame) creates a fued between neighbors unlike anything I have seen in a while. Following a fraternity moving in next to Mac (Seth Rogen) and Kelly (Rose Byrne), a recently married couple who is taking care of their first baby, this plot could have either been a full on drama of a family trying to deal with that, or a full on comedy, which this film delivers on in spades. Zac Efron and Seth Rogen play off each other amazingly well and I bought every one of their motives throughout the film. While Mac and Kelly try to act cool to earn respect, they come up with plans to ruin the fraternity, while the fraternity is reciprocating exactly that. It is comedies like this that really work with great writers at the helm. What is odd is that the two writers had never really done anything huge as far as screenplays go, but producing great comedies like "The 40 Year Old Virgin," "Talladega Nights," or "Funny People" is obviously what got their foot in the door for this. "Neighbors" is very cleverly written in how it's scenarios play out, how smart these characters become, while still finding the time to slow down, develop characters, and also have insanely bat-shit crazy party sequences. "Neighbors is an absolute blast of a film. There really is not much else to say about this film. It is a very straight forward fued comedy with more heart than you would come to expect from a film like this, more character development than what is needed, and a cast that adds to all of those elements. Well-directed, hilarious in almost every scene, and far better than anyone could have predicted it to be, "Neighbors" hits on all cylinders. The one flaw I find when watching this film is that it relies a little too much on dick jokes when it can't find anything clever to do. That could have been improve for all I know, but nevertheless, that is my biggest complaint. "Neighbors" is fun from beginning to end. It's nothing spectacular, but for the type of story it is presenting, what more could you want?

I keep hearing this is a good movie, but I think I am just too old for this party crap. I suspect the good reviews from women my age are for all the topless scenes of Zac Efron, because it sure isn't for the great storyline. Don't think I laughed once.

Vaguely amusing that quickly fades as the story drags.