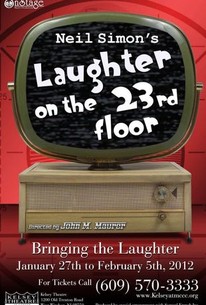 Playwright Neil Simon got his first big break in the early '50s as a staff writer on Sid Caesar's fabled television series Your Show of Shows, and this comedy (adapted by Simon from his play) takes a fictionalized look at the backstage chaos that went into producing one of the landmarks of television's golden age. Max Prince (Nathan Lane) is the star of The Max Prince Show, a popular comedy-variety series with ratings that have begun to slip; Prince's show is still a major hit on the East Coast, but network executive Cal Weebs (Colin Fox) insists that it's too sophisticated for the Midwest, and urges Prince to dumb down his act. Prince has also become the whipping boy of newspaper columnist Walter Winchell (Frank Proctor), and between the tensions of producing a hour of top-quality comedy each week and being pestered about his ratings, Prince is beginning to unravel. His relationship with his wife Faye (Sherry Miller) and their children is falling apart, and stress is eating him alive. Prince's brother Harry (Richard Portnow) is Max's assistant, and his last line of defense against both the network and his writing staff, which spend its days coming up with business for the show while hurling humorous invective at each other and anyone else within earshot. (The actors playing Max's writers include Mark Linn-Baker, Victor Garber, Dan Castellaneta, Saul Rubinek, Peri Gilpin, and Zach Grenier.) Laughter on the 23rd Floor received its world premiere at the 2001 Palm Springs Film Festival and was scheduled for showings several months later on the Showtime premium cable network (who co-produced the feature). The film was directed by Richard Benjamin, who previously teamed with Mark Linn-Baker for another comedy inspired by the career of Sid Caesar, My Favorite Year.

Critic Reviews for Neil Simon's 'Laughter on the 23rd Floor'

The cast makes the comedy work, although the streaming jokes get really tired really fast, and the scenes aren't sustained enough to build significant momentum.

There are no featured reviews for Neil Simon's 'Laughter on the 23rd Floor' at this time.