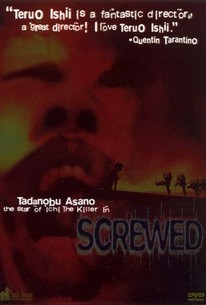 Based on the cult Garo comic by famed manga artist Yoshiharu Tsuge, this film -- directed by veteran yakuza flick auteur Teruo Ishii -- is a hallucinogenic tale about love, death, dreams, and reality. Tsube (Tadanobu Asano) is a down-and-out cartoonist who can't cough up enough money to pay the rent. His live-in girlfriend Kuniko (Miki Fujitani) lands a job as a maid in an all-male company dormitory while Tsube crashes with a painter friend of his. Tsube soon realizes the pitfalls of this setup -- his friend tries to spoon up with him at night while he is driven mad with jealousy by flirtatious dorm residents. When the two finally break up after Kuniko succumbs to temptation and has a one-night stand, Tsube tries to kill himself by downing fistfuls of pills. He comes to in a hospital room as a nurse swaddles him in a diaper and as his smirking friend looks on. The youth goes to the countryside to convalesce and to piece his life together. Instead, he has a series of bizarre erotic encounters. A beautiful tavern hostess (Tsugumi) puts his hand under her top; an icy studio model (Mika Aoba) gives him a thorough tour of her naked body while taunting his apparent lack of interest; and an old maid who runs a restaurant shags him all night and casts him aside the following morning.

There are no critic reviews yet for Nejishiki. Keep checking Rotten Tomatoes for updates!

There are no featured reviews for Nejishiki at this time.