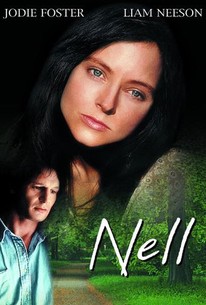 Critics Consensus: Despite a committed performance by Jodie Foster, Nell opts for ponderous melodrama instead of engaging with the ethical dilemmas of socializing its titular wild child.

Critics Consensus: Despite a committed performance by Jodie Foster, Nell opts for ponderous melodrama instead of engaging with the ethical dilemmas of socializing its titular wild child.

Critic Consensus: Despite a committed performance by Jodie Foster, Nell opts for ponderous melodrama instead of engaging with the ethical dilemmas of socializing its titular wild child.

The dilemmas involved in socializing a socially isolated individual are explored in this moving drama set in the Smokey mountains. Nell is not a "feral" child. She lived an isolated life in a remote mountain cabin beside a quiet lake with her mother, a hermit who suffered a series of strokes. She is discovered by Jerome Lovell, a doctor, who begins to observe her in secret. He is intrigued by her strange language which was influenced by her mother's aphasia. He is also intrigued by her hostile behavior when she is faced with strangers. His observations are interrupted by the intrusion of psychologist Paula Olsen. Together they work towards socializing Nell with the sad realization that their actions will steal Nell's innocence.

Danny Millsaps
as Deputy
View All

Nell is an effective film, and a moving one. That is largely because of the strange beauty of Jodie Foster's performance as Nell, and the warmth of the performance by Liam Neeson, as a doctor who finds himself somehow responsible for her.

All of this proves somewhat uplifting and, in the end, fairly moving. Under Apted's caring direction, Foster gives a fearless, appealing, utterly uninhibited performance throughout.

Stunningly awful on almost every level.

Somber, ponderous, and pretentious, this is a clinical study of a wild woman (Jodie Foster) raised in the backwoods, far from the interference and contamination (according to the film) of Civilization. It's better to see Truffaut's Wild Child.

Decent triumph over adversity movie. Nell has a unique disability.

I know I'm in a minority, but I sort of had fun with this movie.

Interesting, with strong performances, though not thoroughly convincing

Nell will startle you with its poignant message that we can all be angels bringing grace and trust and light into each other's lives.

How in the hell did Jodie Foster seriously get an Oscar nomination for this, possibly the weirdest film to ever be taken seriously on the public stage? I mean, I get the message of the film overall: the fact that those who are alternative don't stand a chance in a society that prides itself on revealing the hidden truths everywhere they may be hiding. Still, does anyone really want to stand up and say that Foster's performance as the nearly mute, and very animalistic Nell, is great, or even remotely realistic? She looks so hair brained, that a parody performance would be unrecognizable compared to this film. I mean seriously, in what universe is this okay? Liam Neeson and Natasha Richardson make an interesting duo as the scientists who evaluate Nell, but besides that there is no sense, honesty, or truth in any of these performances. It's bland, while also being hyper animated with the feral yowls of its lead, and the strange fight for privacy that stirs the story. Seriously, it's not even good for a bad movie; it's just pure gross cheesiness.

Jodie Foster is a great actor. Watch this movie just to see her performance.

Not a great movie.