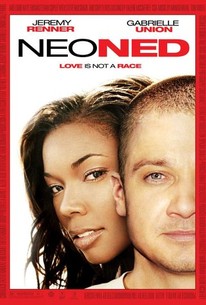 Ned (Jeremy Renner of Dahmer) is a proud member of the Aryan Brotherhood who has been admitted to a mental institution for his involvement in a racially motivated murder. Dr. Magnuson (Cary Elwes) and Johnny (Ethan Suplee) have trouble keeping Ned in line. Boisterous and belligerent, he's prone to childish tantrums when things don't go his way. Still, the other inmates, like Joey (Eddie Kaye Thomas) seem to look up to him. Ned's life at the facility is upended with the arrival of Rachael (Gabrielle Union of Bring It On), a beautiful young black woman who's brought in shouting German, and seems to believe that she's possessed by the spirit of Adolf Hitler. At first, Ned mocks her, and attempts to provoke her, but soon, his feelings toward Rachael turn surprisingly tender. Eventually, Ned and Rachael open up to each other, revealing the past traumas that left them in such a screwed up state. Ned, still reluctant to give up the accoutrements of skinhead life, tells Rachael about his imprisoned father and his unhappy foster care experiences, and Rachael tells him about being sexually abused, and reveals that she has a young daughter. When Ned is released from the hospital, he convinces Rachael to leave with him, but the couple finds life together on the outside difficult. Neo Ned also stars Steve Railsback and Sally Kirkland. It was written by Tim Boughn and directed by Van Fischer (Blink of an Eye, aka Urban Jungle). It had its world premiere in the Narrative Feature Competition of the 2005 Tribeca Film Festival.

It's a little rough around the edges, to be sure, but with such strong lead performances there is something irresistible in the film's audaciously straight-faced portrayal of such an unlikely relationship.

Neo Ned may be ludicrous on paper, but it has what fans of independent film are looking for -- atmosphere, humanity and just a dash of fantastic drama.

The disgust over Neo Ned is rightfully deserved. The movie carelessly throws around the n-word and other acts of violence for humor.

Never boring, never pretentious, never preachy, Neo Ned could find its place alongside some of the great independent romance films of all time, if enough people are able to catch a glimpse of it.

The problem lies in the film's inability to decide whether such loaded images are funny in a Farrelly Brothers/Dave Chapelle kind of way or if they mean something deeper.

In spite of its technical weaknesses (which brought this movie down for me a bit) this is still a really good movie with a good story and some strong performances. I don't think it goes as deep as it should into the complexities of a neo Nazi dating a black woman, they just really gloss over it. Maybe they were going for a lighter tone, if so, I can understand that...since this is a movie about the ability for people to change their ways, so in that regards it's acceptable. The weaknesses mostly go to the look of the film. It does look like a very low-budget movie, but they make the most with what they had so I can't fault it that much. There's also some iffy pacing near the middle of the movie. But the movie makes up for it with heart and great acting, especially by Jeremy Renner. He definitely always gives it his all, no matter what. The ending is also pretty damn great and sweet and almost added half a star to the movie. So overall, while it has some glaring technical issues, this is a really good movie that, unfortunately, not enough people will get to see. But it is on netflix, so if you have it...go watch it.

Here's an interesting movie about two individuals, with problems of their own, connect in a mental institution. They decide to take on the responsibilities of the outside world, and become part of it when their deepest fears become too much to bear. Great cast- Jeremy Renner, Gabrielle Union, Ethan Suplee, and Eddie Kay Thomas. Worth seeing!