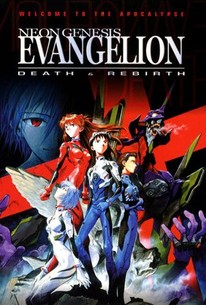 Hideaki Anno directs this hallucinogenic animated feature, created mostly through a compilation of clips from the wildly popular series Neon Genesis Evangelion. Spliced together with minor amounts of new footage, the film is meant to be viewed after the ending of the TV series, but before watching Neon Genesis Evangelion: End of Evangelion, to offer a new perspective on the surreal conflux of symbols, metaphors, and subtext. Death & Rebirth recounts the TV series' story of monstrous, destructive angels and spiritually imbued robots, beginning in the year 2000, when an angel named Adam is discovered in the depths of the South Pole. After uncovering him causes a metaphysical breach resulting in an impact that melts the ice shelf -- flooding the world and darkening the skies with ash -- half the world's population is dead, and humanity is now locked in a pitched battle for its existence against these so-called messengers of God. Only 14-year-old children can synch themselves mentally and physically with the giant robots called Evas that humanity utilizes to fight the angels, and just what power lies within the Evas is unclear. In 2015, teenaged Shinji is instructed by his scientist father to pilot an Evangelion, alongside Asuka, a beautiful, but haughty red-headed German lass, and Rei, a quiet girl whose past appears to be connected to Shinji's in strange and unnatural ways. Each of these children has his or her own questions about identity and love, but as the story swells to its climax, the larger questions become ones about who or what God is, and what humanity is afraid of. ~ Jonathan Crow, Rovi

Recommended for die-hard fans of the show, but newbies should rather check out the whole TV show DVD box set beforehand.

There are no featured audience reviews yet. Click the link below to see what others say about Neon Genesis Evangelion: Death & Rebirth (Shin seiki Evangelion Gekijô-ban: Shito shinsei)!