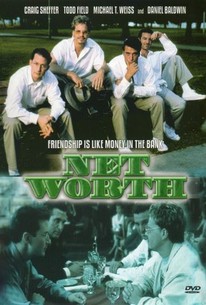 Four pals take on their world of high finance in a new and unusual way in this comedy-drama. Woody (Craig Sheffer), Robert (Daniel Baldwin), Michael (Michael Winslow), and Thad (Todd Field) are four close friends in their early thirties who have always felt a strong sense of competition. However, their desire to one-up one another is taken to a new extreme when they agree to an unusual contest -- they'll all move to a city where they don't know a soul, with each carrying only 100 dollars in cash and the suit on their back, and see who can rack up the greatest net worth in only 30 days. The four friends learn a great deal about each other and themselves, as they gain a new perspective on both business and life. Net Worth marked the directorial debut for Kenny Griswold.

Dani Nogle
as Carrie
View All

Critic Reviews for Net Worth

There are no critic reviews yet for Net Worth. Keep checking Rotten Tomatoes for updates!

There are no featured reviews for Net Worth at this time.