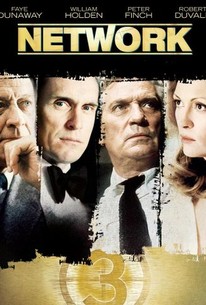 When anchorman Howard Beale is forced to retire his 25-year post because of his age, he announces to his viewers that he's going to commit suicide on his final program. When his announcement looks like it will improve the ratings, the entire event is turned into a garish entertainment spectacle.

Lee Richardson
as Narrator
View All

No performance is less than brilliant, with Dunaway particularly effective in the film's showiest role. Holden, Finch and Duvall, as always, contribute bed-rock-solid performances.

This tale of a failing network that feeds on the mental breakdown of one of its anchors, cannibalising itself for ratings, feels as savagely relevant now as it did when it was released nearly 40 years ago.

The plot that Paddy Chayefsky has concocted to prove this point is so crazily preposterous that even in post-Watergate America -- where we know that bats can get loose in the corridors of power -- it is just impossible to accept.

The film's never been more timely.

Chayefsky was apparently serious about much of this shrill, self-important 1976 satire about television, interlaced with bile about radicals and pushy career women, and so were some critics at the time.

...an erratically-paced yet periodically spellbinding drama...

[Network] is one of the most ferocious, outspoken, and generally cynical attacks ever launched by one medium upon another, and on the society that shapes and harbors them both. Fortunately... the assault Is often as entertaining as it is savage.

The performances in the film are all around fantastic. Of course, Peter Finch as the mad-prophet Howard Beale is engaging. And Faye Dunaway as the soulless programming director Diana Christensen is a power-house.

Boasts an extremely intelligent script that is, in alternation, deliciously sardonic and depressingly sobering, with rapid-fire dialogue that congests every cynical exchange.

It's scary just how prophetic Network has become.

An intelligent and hilarious satire whose main strength lies especially in a superb ensemble cast and a fantastic script that delights us with many priceless exchanges of dialogue as it offers us a relevant, thought-provoking social commentary on the television industry.

Strange how Howard Beal "the mad prophet of the airwaves," dominates our memories of "Network". We remember him in his soaking-wet raincoat,hair plastered to his forehead,shouting "I'm as mad as hell,and I'm not going to take anymore!" The phrase has entered into the language of our time becoming a catchphrase of our generation. But Beal(Peter Finch) is the movie's sideshow. The story centers on Diana Christensen(Faye Dunaway),the rating-hungry programming executive who is prepared to do anything for better numbers,and is prepared to do anything in her power to make it to the top of the television empire. The mirror to which she plays is Max Schumacher(William Holden),the middle-aged news executive who becomes Diana's victim and lover,in that order. What is fascinating about Paddy Chayfesky's Oscar winning screenplay is how smoothly it shifts gears,from satire to farce to social outrage. The scenes involving Beal and the revolutionary "liberation army" are cheerfully over the top. The scenes involving Max and Diana are quiet,tense,convincing drama. The action at the network executive level aims for behind-the-scenes realism;we may doubt that a Howard Beal could get on the air,but we have no doubt the idea would be discussed as the movie suggests. And then Chayefsky and the director,Sidney Lumet,edge the backstage network material over into satire too-but subtly,so that in the final late-night meeting where the executives decide what to do about Howard Beal,we have entered the madhouse without noticing. "Network" was not only a sensation,but a phenomenon when it came out in 1976. It was Nominated for Five Oscars including Best Picture and it was victorious in winning four for Peter Finch(Best Actor), Faye Dunaway(Best Actress), Beatrice Straight(Best Supporting Actress),and Best Original Screenplay(Paddy Chayefsky) not to mention winning Four Golden Globes that year for Best Actor(Peter Finch), Best Actress(Faye Dunaway), Best Original Screenplay(Paddy Chayefsky),and Best Director(Sidney Lumet). "Network" upon it's release was a huge boxoffice smash becoming one of the top ten films of 1976 behind "Rocky", "The Omen", "All The Presidents Men", "Taxi Driver",and the remake of "A Star Is Born". "Network" stirred up so much debate about the decaying values of television which was unheard of 1976 but relevant today. It was like a prophecy of what was to come. When Chayefsky created the character of Howard Beal, who would have imagine to onslaught of Jerry Springer, Morton Downey, Jr., Geraldo Rivera, Howard Stern, Maury Povich, Rush Limbaugh, Glenn Beck, Ed Schultz, to Montel Williams to anything involving the WWF or the WWE and anything involving "the reality show" craze that has trashed the overall aspect of television today as we know it. Even so it was sensation when it came out in 1976,but for the most part it is really outdated-most noticeably Howard Beal's first news set to other parts including the network strategy meetings,remain timeless. Not to mention the set that Beal graduates to featuring soothsayers and gossip columnists on revolving pedestals nicely captures the feeling of some of the news/entertainment shows of that time. Most people remember Howard Beal got fed up with the bullshit around him couldn't take it anymore,and had a meltdown while on the air. But it was not quite like that. Beal is portrayed as an alcoholic doing such a bad job that he's fired by his boss(Holden). They get drunk together and joke about him committing suicide on the air(during one the episodes of The Howard Beal Show). The next day, in a farewell broadcast,Beal announces that he will indeed kill himself because of falling ratings. He's yanked from the air but begs a chance to say farewell. Lumet and Chayefsky pull out all the stops here. After Beal orders his viewers to "repeat after me",as they cut to exterior shots of people leaning out of their windows and screaming to the top of their lungs that they're mad as hell too. This is electrifying drama when it came out in 1976. Beal's ratings skyrocket(he is fourth after The Six Million Dollar Man, All In The Family,and Phyllis)and a new set is constructed on which he rants and raves after his announcer literally introduces him as a "mad prophet". Counter to this is the extravagant satire is the affair between Max and Diana. Faye Dunaway's seductive performance is what gives this movie it's glow as the obsessed programming executive;her eyes sparkle and she moistens her lips when she thinks of higher ratings,and in one sequence she kisses Max while telling him how cheaply she can buy James Bond re-runs. Later in bed,discussing ratings during sex,she climaxes while gasping not only about the Mao Tse-tung Hour,but bringing an idea for a lesbian daytime soap opera called "The Dykes" where she discusses the series about a female mistress who has an affair with her husband's wife. Then the idea for a prime-time show based on the exploits of a group obviously inspired by the Symbionese Liberation Army. The one hilarious scene says it all which has a Patty Hearst type character and uses an Angela Davis type as her go-between. Much more interesting is William Holden's performance that keeps the movie riveting from start to finish. Beatrice Straight's role as Max's wife was so powerful and small it won her the Best Supporting Actress Oscar as a convincing portrayal of a woman who has put up with an impossible man for so long that she feels angry and betrayed after Max cheats on her. The film is full of vivid supporting roles. Ned Beatty has a sharp-edged cameo as a television executive while Robert Duvall(who was Oscar Nominated for Best Supporting Actor) plays an executive who is involved in the goings on in front and behind the scenes while Wesley Addy is the handsome gray-haired executive in the network's display window during behind the scenes and during one of the stockholder meetings. One of the insights to "Network" and as well as Chayefsky's key insights is that the bosses don't much care what you really say on television as long as you don't threaten their profits..

Okay, everybody: go to your windows and shout: I'm made as h*ll and I'm not going to take it anymore. This movie took my breath away. Almost 30 years after it was made, it is even more relevant. The screenwriter, Paddy Chayefsky is responsible for a brilliant piece of writing. I got actual chills down my spine when the chairman of CCA industries (Ned Beatty), who owns the network, calls Howard Beal (Peter Finch) into the boardroom and reads a little reality to him: there are no more countries, there is no democracy, it's only IBM, ITT, Exxon. Can anyone say "Citizens United?" The subsequent drop in ratings when Howard preaches this on his tv show is so scary. Even scarier is the radical group who co-opts their ideals for subsidiary rights and distribution rights. Hello reality television. We can't talk about society being responsible for all the bad things that happen to us, because guess what? We be society.

Sidney Lumet's Network is yet again a stunning piece of cinema that explores the roots of a TV network looking for the next big thing to air. This is a fine satire that boasts a very strong cast of talented actors. Lumet always crafts a solid picture and he pulls through yet again with this follow-up to his highly engaging film, Dog Day Afternoon. Lumet always seems to direct films that have engrossing plotlines that just grabs your attention, and this is a powerful satirical drama that evokes every quality of Sidney Lumet's unique filmmaking. The film's high points are in its acting, and the cast that Lumet has assembled here, is really one of a kind. Several actors here give standout performances that give Network a much more intense viewing experience, one that you simply can't turn away from. The script is very solid as well and well layered to keep you engaged from start to finish. One thing that I love about Lumet's work is his knack to tell a great story using the simplest ideas. In turn, he is able to create picture that are far better than most, and that's why he is one of cinema's greatest artists. Fans of his will surely enjoy this powerful, satirical work that blends effective drama, and dark humor into a smartly written script. Aided by a memorable cast that should delight the most demanding cinema buff, Network is a standout picture that is a must see. With every film that Lumet has made, he would craft something totally different, and reinvent the cinematic medium. Network is a flawless picture that is among the most standout work of the 1970's and solidified Sidney Lumet's reputation as a one of a kind filmmaker. This is a film that took risks and pushed the envelope and explores media sensationalism in a very interesting way. If you want a well acted picture, with a great plot, then give Network a shot.