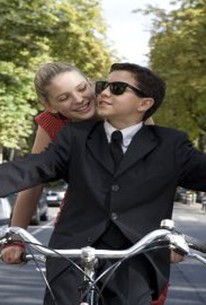 The title represents an in-joke, and a word of explanation may help: early 21st century French president Nicolas Sarkozy originally hailed from the Parisian suburb of Neuilly-sur-Seine, notorious for the allegedly pompous, haughty attitudes among its residents. The vernacular of the title translates, roughly, as "Neuilly yo mama!," or a light slap in the face to such people. As directed by Gabriel Julien Laferrière, this offbeat, occasionally sarcastic coming-of-age comedy from France predominantly unfolds in Neuilly. Raven-haired, 14-year-old Arab boy Sami Benboudaoud (Samy Seghir) enjoys growing up in the rough-natured but familiar town of Chalon-sur-Saône, where he spends his time palling around with several buddies. But when his mother (Farida Khelfa) takes a job on a cruise ship, Sami gets yanked out of the community against his will and dropped into the custody of his financially comfy aunt and uncle, who live in Neuilly. Sami instantly becomes a fish out of water, and must face a number of formidable nemeses, including his obnoxious cousin, Charles (Jeremy Denisty) whose chief ambition is to become one of Sarkozy's successors, and a bigoted WASP-y school that perceives all Arabs as "scum," mirroring a notoriously racist, well-publicized remark from Sarkozy himself. Sami also falls hard for his cute, blonde, super-intellectual classmate Marie (Josephine Japy), who doesn't exactly warm to the idea of dating someone with Sami's ethnic background.

There are no critic reviews yet for Neuilly sa mere!. Keep checking Rotten Tomatoes for updates!

There are no featured reviews for Neuilly sa mere! at this time.