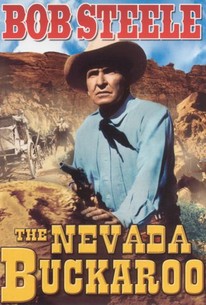 An early Bob Steele sound oater from low-budget company Tiffany, Nevada Buckaroo featured the bantam-weight star as the Nevada Kid, a stage robber arrested when he attempts to steal a kiss from Joan (Dorothy Dix), one of his victims. Nevada's sidekick, Cherokee (George "Gabby" Hayes), steals a petition to have Rattlesnake Gulch elected county seat and alters the document into a request for Nevada's pardon. Believing the document to be real, Nevada decides to go straight, offering to prove himself by guarding the stagecoach. Naturally, the stage is then robbed by Nevada's old gang and the driver killed. Only Joan believes in Nevada's innocence and helps him escape. Tracking down the gang, Nevada returns the stolen money to the express company and is proclaimed a hero.

Blackie Whiteford
as member of lynching party
View All

There are no critic reviews yet for Nevada Buckaroo. Keep checking Rotten Tomatoes for updates!

There are no featured reviews for Nevada Buckaroo at this time.