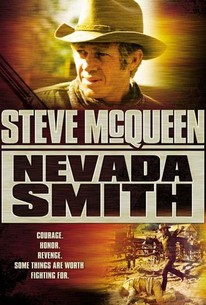 Henry Hathaway's film is based on a character from Harold Robbins' The Carpetbaggers, who, in turn, based it on cowboy actor Ken Maynard. Set in the West of the 1890s, the film opens with the torture and murder of the parents of Max Sand (Steve McQueen) by a trio of gunslingers seemingly motivated by their hostility toward the mixed nature of the marriage, since the wife is a Native American. Swearing revenge, the young cowhand enlists the help of itinerant gunsmith Jonas Cord Brian Keith, who teaches him how to shoot while counseling against revenge. Nonetheless, Sand doggedly scours one town after the other before finally running up against one of the murderers, Jesse Coe (Martin Landau). He finally kills Coe in a vicious knife fight, but is severely wounded himself and has to be nursed back to health by Neesa (Janet Margolin), a young Kiowa woman. He next heads for Louisiana where another of the murderous trio, Bill Bowdre (Arthur Kennedy), is serving a prison sentence in a remote swamp. In order to get close to the man, Sand stages a robbery, and is soon among the prison inmates. This was the only film on which McQueen worked with Landau, the only other person admitted to the Actor's Studio out of thousands of applicants in 1957. ~ Michael Costello, Rovi

Not a worthless film, although it's impossible to take seriously.

Overlong, dull and labored follow-up to Harold Robbins' The Carpetbaggers.

The best thing that can be said about Nevada Smith is that it goes in, does what it needs to do, and gets out before it's too late.

Underneath it all Nevada Smith is hack work, with a plot that is not so much unbelievably bad but simply unbelievable.

A fine Western with a revenge of the title role that is actually a strong and revealing study of the regeneration of one man. At age 36, Steve McQueen is a bit hard to believe as a 'kid'. The story obviously spans many years in Max Sand's life and if the writers had played this up more McQueen's age would not have mattered. Even showing Max and Alex Chord in a winter setting followed by spring, something to show an extensive passage of time would have helped make McQueen's age more fitting. A superb cast of supporting actors backs up McQueen. Brian Keith is the perfect father figure who takes Max in and teaches him to use firearms and tells him about life and how to find the men who killed his parents. Suzanne Pleshette cannot be made to look bad no matter how hard the make up department tries. Even dirty and sweaty in the swamp, her natural beauty and class shine. These traits and her unique voice and soft movements steal any scene she is in. She almost upstages McQueen. Martin Landau, Arthur Kennedy and Karl Malden are as bad as any movie villains I ever saw.

Good if a bit overlong western with Steve, oozing charisma, acquitting himself well as he changes from callow youth to hardened gunslinger. A great supporting cast helps immeasurably with Suzanne Pleshette standing out bringing a gruff sexy charm to her too few scenes.