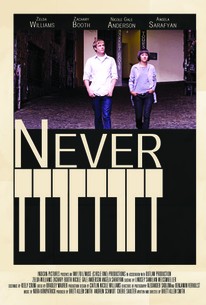 NEVER tells the story of Denim (Booth), new to Seattle and eager for the next phase of his life to begin. But when he falls in love with Nikki (Williams), a gay singer-songwriter struggling in Seattle's music scene, the sudden and intense friendship they discover will change their lives - and force them to question everything they thought they knew about love. With original music by Nora Kirkpatrick (of Edward Sharpe & the Magnetic Zeros) and a powerful supporting cast featuring this generation's top young actors. The film also features an eclectic soundtrack from Seattle Label- Sub Pop Records.

"Never" may take place in the present, but its mopey low-fi indie character drama - set to earnest singer-songwriter tunes - feels as if it's been transported from the early '90s.

There are no featured reviews for Never at this time.