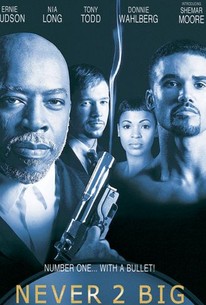 Shemar Moore, Ernie Hudson and Nia Long star in this urban drama about a singing star who wants to get out of her recording contract and sign with another label. The top men at her label, however, won't hear of this and have her killed with an overdose of drugs, planting evidence that would implicate her cousin (who was also her manager) in the crime. The cousin must take it on the lam as he tries to find the identity of the real murders so her can bring them to justice and clear his own name. Former New Kids On The Block star Donnie Wahlberg appears in a supporting role. Also shown under the title Butter.

There are no critic reviews yet for Never 2 Big. Keep checking Rotten Tomatoes for updates!

There are no featured audience reviews yet. Click the link below to see what others say about Never 2 Big!