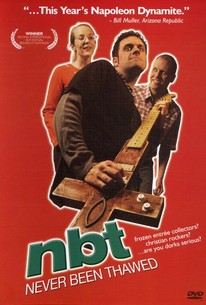 Critics Consensus: Pokes fun at the obsessive personalities that make up peculiar American subcultures, but misses its targets too often to be more than merely passable.

Critics Consensus: Pokes fun at the obsessive personalities that make up peculiar American subcultures, but misses its targets too often to be more than merely passable.

Critic Consensus: Pokes fun at the obsessive personalities that make up peculiar American subcultures, but misses its targets too often to be more than merely passable.

Shawn has been collecting frozen dinners since he was twelve. Today he works part-time as a dental hygienist to cover the cost of operating fourteen full-sized freezers in a one bedroom apartment. Shawn is the founder of the Mesa Frozen Entrée Enthusiasts' Club, a small group of fanatical collectors determined to host the world's first Frozen Entrée Enthusiasts' Convention. Shelly became infatuated with Shawn and joined the club after seeing him sing with his band. In a shameless bid for money and fame, Shawn had recently "converted" his obscene punk band to Christian rock. Shelly, a counselor on an Intercourse Prevention Hotline, a devout Christian and proud virgin was smitten by Shawn's "Christian bad-boy" image. Al, the bass player, questions his bands new direction. He belongs to Shawn's club primarily to foster his secret crush on Shelly. Al's prospects are not helped by the fact that he lives with his parents and works as a "smilist" at Klown Kutz.Milo, the band's manager, owns the No Choice Café - an anti-abortion themed Christian café located across the street from an abortion clinic. Milo believes Shawn's band is ready for the Christian Big Time and has set up a showcase performance for Holy Trinity Records. Meanwhile, Vince, the club's wealthiest member, has assembled an entrée collection that may soon rival Shawn's. Vince's impressive collection makes him a serious threat to Shawn's authority. NBT is a hilarious, dark and smart look at the subcultures that can turn each of us into fans, followers and serious dorks.© -- Slippery Chicken Pictures

Critic Reviews for Never Been Thawed

What we're left with is a movie filled with cultural gags that mock without achieving the level of good satire. Sometimes, alas, being funny just isn't enough.

Never Been Thawed displays moments of cleverness but not enough to sustain its feature-length running time.

Essentially an exercise in the humor of hypocrisy and sketch comedy woven into a coherent whole.

You've heard about geeks who collect all sorts of weird things, but frozen TV dinners?

The jokes are all the same joke, and it wears thin over the course of 80 minutes.

This is an often hilarious and painfully on-target mockumentary about people who are pulled into special interest cults like "Star Trek" or, in this case, frozen entree fandom.

When the film works, it works well, and there should be enough novel material to satisfy fans of the mockumentary subgenre.

It's just hilarious enough to overcome its limitations -- and even, occasionally, make them part of its unforgiving worldview.

The Hungry Man deluxe of frozen entree mocumentaries, Anders and LeVinus break the seal on freshness with the sleeper slacker comedy of the year.

Audience Reviews for Never Been Thawed

There are no featured audience reviews yet. Click the link below to see what others say about Never Been Thawed!