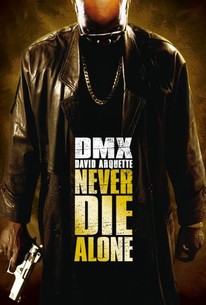 Critics Consensus: DMX's menacing charisma is put to good use in this stylish but hackneyed modern-day noir.

Critics Consensus: DMX's menacing charisma is put to good use in this stylish but hackneyed modern-day noir.

Critic Consensus: DMX's menacing charisma is put to good use in this stylish but hackneyed modern-day noir.

From a script from first-time scribe James Gibson comes this filmed adaptation of ex-gangster Donald Goines' 1974 novel Never Die Alone. Directed by Ernest R. Dickerson (Juice, Bones), the film stars David Arquette as Paul Pawlowski, a reporter who takes an interest in gang kingpin King David, played by rapper/actor DMX. When King David is killed, Pawlowski happens upon the criminal's journal and envelops himself in his story. From there, the rise and fall of King David is covered in flashbacks as Pawlowski makes his way through the diary. Aisha Tyler and Jennifer Sky co-star. ~ Matthew Tobey, Rovi

Robby Robinson
as Man in Apartment

Jeff Sanders
as Sentry Guard No. 1

Rachelle Drummond
as Twin No. 1

Violent movie starring rapper DMX is not for kids.

Thumbs down for me.

The various stories are strong enough to compensate for any acting deficiencies.

This is not a workable drama, just a series of ideas that rap stars who worship Scarface think would be cool to see.

It's too bad the filmmakers couldn't find a way to present [Goines's] vision without resorting to some pretty threadbare clichés.

His death was moving; his life was not. It's a requiem for a scumbag--one who left a whole lotta decent people destroyed in his wake.

[A] gritty film noir [about] a sleazy drug pusher looking for redemption, but who - in classic noir fashion - learns that there is no escaping paying for one's past sins.

Hampered by its convoluted plot and a marked melodramatic streak that counteracts the film's cool factor.

There's neither action nor thrill in this so-called action thriller, and there's really no reason to sit through it.

A slow starting Urban Thriller that is worth bearing with to reveal the true plot behind the film. In honesty the film is just easy watching, but has been seen time and time again and offers nothing new to this style of film.

Somehow this dark fiction, seems to work out very well.

Disappointed with this one. Had a few moments where I thought okay this movie might have some promise. The only character you somewhat care for is the one played by Michael Ealy. He was the only one who seemed to have depth where the others appeared to be superficial and lost.

Movies awesome. DMX's best film. It's kind of insane, and tragic, through out the entire movie - but the storyline and twist, and everything, is beyond good. It's sad but great, at the same time. It tells it like it is. Check it out