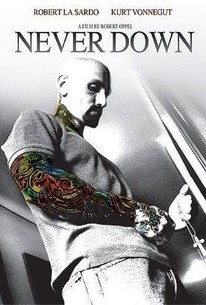 Released from prison after serving a five year sentence for armed robbery, ex-convict Rico (Robert La Sardo) attempts to reconnect with his ex-wife and daughter in director Robert Oppel's emotionally-charged drama. Prison life was never easy, but now Rico is torn between his allegiance those who would tear him down, and his dedication to building a new life. The minefields that Rico will now walk aren't just emotional either - should he make the wrong move on the outside chances are good that Rico could suffer physically as well. Thankfully for Rico, a wise apparition named Robert (Kurt Vonnegut) will be there to help guide him and ensure that the conflicted ex-convict finally have the chance to hold his daughter close once again.

Critic Reviews for Never Down

There are no critic reviews yet for Never Down. Keep checking Rotten Tomatoes for updates!

There are no featured reviews for Never Down at this time.