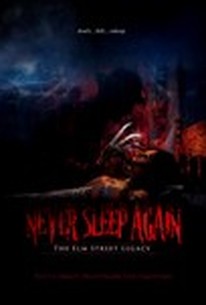 Explore the origins of everyone's favorite hideously charred boogeyman, discover the secrets of the horror franchise that keeps coming back, and find out just what an impact Wes Craven's creation has had on the world of pop culture in this documentary narrated by original Nightmare on Elm Street star Heather Langencamp. In-depth interviews with the actors and filmmakers who helped make Freddy Krueger a true icon of fright reveal delicious details about the series that's been giving horror fans goose-bumps since 1984, and newly unearthed materials offer a better look than ever at the Elm Street legacy. Highlights include interviews with Wes Craven, John Saxon, and Robert Englund, as well as behind-the-scenes footage, special effects footage, and deleted scenes. ~ Jason Buchanan, Rovi

Never Sleep Again, though both funny and frightening, is ultimately a touching journey through the Elm Street mythology.

For a four-hour film, it sure does fly by, and you certainly won't be snoozing during it.

Never Sleep Again won't be winning any awards as the kind of documentary that changes and rearranges the genre. Instead, it is a wildly informative summary of a seminal horror icon - and the people who populated his dark, disturbing dreamscapes.

It's almost like something Ken Burns would make if he were a huge horror geek.

An absolute must have and should be a key ingredient in any horror library...

Never Sleep Again is the definitive documentary about The Nightmare on Elm Street franchise. This is a well crafted documentary that goes in depth about this legendary series. The cast from the entire franchise are here discussing their scenes and other memories from the time on the numerous films in the series. I've seen plenty of documentaries on horror and this is among one of the finest films that I've seen. This will certainly delight diehard Nightmare fans, and the story that each person brings to the table makes this such an awesome documentary. This is an effectively directed feature that really goes behind the story and gives the fans exactly what they want. This is a definitive film that will certainly appeal to anyone that has been attracted to horror franchise. The interviews are well done and entertaining and it gives you something fulfilling in terms of how the Nightmare franchise became one of the standout series in the 1980's horror scene. With these films, Wes Craven and Robert Shaye created something truly in the genre and with that being said, there is a lot more to the Nightmare on Elm Street franchise that simply just a slasher film. A few of the sequels, we're quite silly, but all of them were quite entertaining and fun for what they were. Never Sleep Again is an accomplished documentary that is among the finest in the horror genre. Everything you want to know about the Nightmare film is presented here and it is a perfect film for the fans and anyone who loves horror. This is a necessary viewing for genre buffs, and you definitely won't be disappointed with what is offered in this documentary. If you come across this film, check it out, it is worth every second or every nightmare I should say. This film is a pure delight from start to finish. Never Sleep Again is the definitive work on Freddy Krueger and the Nightmare on Elm Street franchise.

Never Sleep Again: The Elm Street Legacy is a documentary that covers the history of the Nightmare on Elm Street series. It's a very thorough and in-depth telling of the franchise from Wes Craven's initial concept to the final film. There are interviews with numerous actors, writers, and directors of the series who share some very interesting experiences that they had with the films and how they affect their lives. And it's narrated by Heather Langenkamp, star of the original Nightmare on Elm Street. However, the documentary lacks discernment and includes a lot of material that's not really needed. Fascinating and insightful, Never Sleep Again: The Elm Street Legacy does an exemplary job at covering one of the landmark horror series in cinema.

An utterly exhaustive, but absolutely fascinating look at the entire Elm Street series. Even though I have never been the biggest fan of the series, I loved how in-depth this documentary was. In fact, I had more fun watching this film than I ever had watching any of the individual films. By the end, one cannot deny Freddie's impact on American culture.

I was thrilled to bits when I first heard that Never Sleep Again: The Elm Street Legacy was being put together. For die-hard Nightmare on Elm Street fans (like myself), this is the holy grail of horror documentaries. It was long overdue, to say the least. Despite New Line Cinema's attempts at a boxed set of all of the films with some extras, there wasn't any sort of documentary chronicling the series as a whole. Not to mention that the TV series has been pretty much ignored by the studio. This was independently financed and produced by a group of fans who are also talented filmmakers, so it was the perfect combination. Even at four hours long, the documentary still feels short because it's so entertaining and you just want it to go on forever. Thankfully, the second disc of the DVD set is filled to the brim with extended interviews and tidbits, as well as an impressive bulk of extras. I've already done a full review of this set elsewhere, but trust me, this is an amazing documentary and a great DVD set for any horror fan.