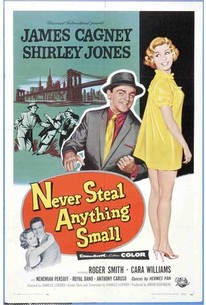 Only one of three films directed by screenwriter Charles Lederer, known for movies as disparate as The Thing (1951) and Gentlemen Prefer Blondes (1953), this crime comedy-drama-musical obviously defies categorization. Mixing James Cagney as a gangster out to control a big union, with musical numbers and cute songs is about like mixing onions and vanilla pudding. Jake MacIllaney (Cagney) wants to be elected president of Longshoreman's union 26 and, being a top mob boss, is used to getting his way. He is not past almost any stunt or method of coercion to get votes. Dan Cabot (Roger Smith) is Jake's lawyer, and after Jake meets Cabot's wife Linda (Shirley Jones), he sets his sights on conquering her affections. Disregard the husband, he can be taken care of. Setting this to music introduces some entertaining songs (I'm Sorry -- I Want a Ferrari) but the seriousness of the mobster's immorality and power is hard to reconcile with a perky tune about not stealing the small stuff.

Tongue-in-cheek borrowings from Guys and Dolls and On the Waterfront seem to be mixed in this tossed salad of a gangland musical comedy.

There are no featured reviews for Never Steal Anything Small at this time.