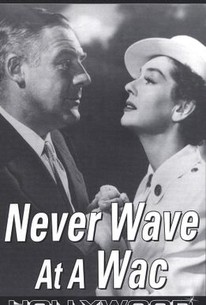 Never Wave at a WAC Photos

Self-centered Washington socialite Rosalind Russell joins the WACS in order to be near her boyfriend William Ching, a GI stationed in Paris. Russell is certain that her DC connections will enable her to get out of the service as easily as she got in. Unfortunately for her, Russell's ex-husband Paul Douglas decides to teach her a lesson by pulling a few strings himself. Several of the army-camp scenes are stolen by Marie Wilson as an amply proportioned chorus girl, who's joined the WACS to escape stage-door johnnies. Filmed in part on location at the Women's Army Corps training center at Fort Lee, Virginia, Never Wave at a WAC was produced by Rosalind Russell's husband, Frederick Brisson. The film was released in England as The Private Wore Skirts.

Omar N. Bradley
as Himself

Howard I. Smith
as Gen. Prentiss

Omar Bradley
as Himself

Critic Reviews for Never Wave at a WAC

There are no critic reviews yet for Never Wave at a WAC. Keep checking Rotten Tomatoes for updates!

Audience Reviews for Never Wave at a WAC

If you've ever seen Private Benjamin you will notice that this movie was the inspiration for that one. Which is better? I'd say they're about the same in terms of comedy and acting and story. A pretty good movie.

Never Wave at a WAC Quotes