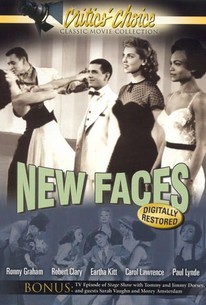 Get a sneak peek at Broadway's biggest future stars back when they were struggling actors just striving for a taste of the big time in this release of stage producer Leonard Sillman's popular +New Faces musical revue. Filmed in 1952 and featuring a series of sketches penned by Ronny Graham and Mel Brooks (credited here as Melvin Brooks), this Broadway production features Eartha Kitt performing memorable renditions of "Uskadara," "Santa Baby," and "C'Est Si Bon" as well as a side-splitting sketch featuring Paul Lynde and Ronny Graham impersonating a series of comical characters. A wraparound skit concerning an enraged Texas creditor who is threatening to shut down the stage show ties the whole program together, and a look at the performers preparing for the show backstage captures all the magic and energy of a big-city stage show in the making.

RONNY GRAHAM
as Himself

Eartha Kitt
as Herself

ROBERT CLARY
as Himself

Alice Ghostley
as Herself

June Carroll
as Herself

Paul Lynde
as Himself

Bill Mullikin
as Himself

Rosemary O'Reilly
as Herself

Allen Conroy
as Herself

Polly Ward
as Herself

Carol Lawrence
as Herself

There are no featured audience reviews yet. Click the link below to see what others say about New Faces!