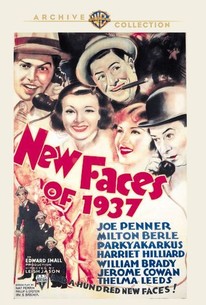 New Faces of 1937 was supposed to be the vanguard of a series of annual musical comedies -- RKO Radio's latest attempt to revive its long-dormant "Radio City Revels" concept. The plot is based on an old show-business legend, later immortalized in Mel Brooks' The Producers: Crooked Broadway producer Robert Hunt (Jerome Cowan) deliberately produces flops so that he can pocket the backers' money himself. His next sure-fire disaster is a show built around talented unknowns (there actually was such a "New Faces" series on Broadway, yielding such stars-to-be as Imogene Coca and Henry Fonda, but it was produced on the up-and-up). When the show threatens to become a hit, the producer desperately seeks a method to sabotage the production. The various subplots involve such vaudeville and radio comedians as Milton Berle (who performs a side-splitting "stockbroker" sketch with Richard Lane), Joe Penner, Bert "Mad Russian" Gordon and Parkyakarkus (aka Harry Einstein, the father of present-day comedians Bob Einstein and Albert Brooks). Among the New Faces displayed herein are 14-year-old dancer Ann Miller, The Brian Sisters, The Three Choclateers and the Four Playboys. Perhaps the fictional Robert Hunt would have been pleased to find out that New Faces of 1937 was a box-office bomb, precluding any follow-ups.

Derry Dean
as Herself

Ann Miller
as Herself

Frances Gifford
as Showgirl
View All

Critic Reviews for New Faces of 1937

There are no critic reviews yet for New Faces of 1937. Keep checking Rotten Tomatoes for updates!

There are no featured reviews for New Faces of 1937 at this time.