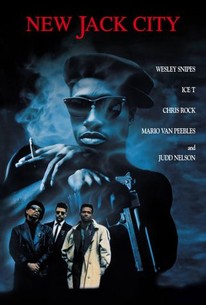 The ruthless leader of a New York City drug syndicate battles to maintain his power and avoid imprisonment in this fast-moving action drama. While the film's heroes are Scotty (Ice-T) and Nick (Judd Nelson), a pair of tough, streetwise cops, the main focus is their target, drug lord Nino Brown (Wesley Snipes). A criminal businessman with no room for pity or emotion, the flashy but severe Brown has built an empire and transformed an abandoned Harlem apartment building into a well-defended fortress. He begins to consider himself invincible, but his lust for power and the unpredictable actions of a former client turned police informer threaten to bring about his potential downfall. First-time director Mario Van Peebles keeps the traditional plot moving at an appropriately rapid pace, with stylish action sequences and energetic performances. The film's violence was somewhat controversial on its initial release, especially after shooting incidents marred showings in several theaters. However, the film's moral message is clearly anti-drug and anti-crime, its main intent to provide a high-powered, modern take on the gangster movie. ~ Judd Blaise, Rovi

Vanessa A. Williams
as Keisha

Fab 5 Freddy
as Master of Ceremonies

Keith Sweat
as Singer at Wedding

Marcella Lowery
as Woman in Hallway

Harold Baines
as Kid on Stoop

Sekou Campbell
as Kid on Stoop

Garvin Holder
as Kid on Stoop

Leo O'Brien
as Kid on Stoop

Bobby Stancil
as Kid on Stoop

Though this often plays like a 70s cop show, it became a prototype for the bling-heavy gangsta melodramas of the 90s.

Filmmakers pull off a provocative, pulsating update on gangster pics with this action-laden epic about the rise and fall of an inner city crack dealer.

It's a superior example of what used to be called blaxploitation, with Van Peebles piling on corruption and carnage for all he's worth.

The movie was advertised (no doubt wisely) as a slam-bang action adventure, but in fact it's a serious, smart film with an impact that lingers after the lights go up.

The film's use of once-imposing, now-crumbling New York architecture is particularly effective in underscoring the story with an air of widespread urban decay.

...has all the energy you could want from a B-picture with A-picture aspirations...

Whilst not as analytical about the debate on drugs like Soderbergh's Traffic, there is much to think about and take from a still-enjoyable movie.

We all know New Jack City is making the right statement on drugs, racism, the system, etc. But the fact is it's not very good.

A cynical director, Van Peebles has style to burn, but his work is too flashy to make sense. This is a gangster-thriller about crack trade in Harlem done as a moralistic melodrama with kinky violence.

...a purely conventional story, but it unfolds in unique and innovative ways, with particularly good turns from its cast, all of which make it a worthwhile watch.

Given the drug-based cop drama/urban crime plot, the interracial partnership of the main cops, and the soundtrack being made up of contemporary urban (black) music, you could be forgiven for confusing this film with being a blaxploitation film. I mean, it IS directed by Mario Van Peebles, and there are some references to films from that genre, but surprisingly, it is not. Mostly because it's played straight, with only some humor, and no camp factor. It is definitely a b-movie, but a competently made high end one. Okay, so the main plot is pretty standard, with two mismatched cops having to team up to take down a powerful drug lord who has taken the streets prisoner with his ultra strong crack. It's still an enjoyable ride though, and it's quite stylish, with some actually pretty decent performances. Okay, so Judd Nelson is underused, but he's good when he's there. Wesley Snipes is fine, but I feel like he's just doing a VERY low-key and subtle take on Tony Montana. The stand outs are Ice-T who, still very much known for his anti-cop songs is great as a tough streetwise cop, and really gets his acting career off to a great start, though after this it wouldn't pick up again until he portrayed another cop on Law and Order: SVU. The other top prize goes to the outstanding Chris Rock, who gives an utterly memorable and gripping turn as an ill-fated ex-junkie turned informer. This is overall a really decent flick. It's ultimately nothing new, but very well played, and far better (both as a directorial debut and in general) than it could have been, so give it a shot.

A team of maverick cops investigate when a gangster takes over an entire tenement block in the New York ghetto. Although this film enjoys a good reputation as a hard-hitting, socially conscious representation of life in "the hood", it is actually EXACTLY the kind of testosterone-soaked, cliched crap that Mario Van Peebles has made his bread and butter ever since. Tacking on montages of drug use and a couple of lines about the "drug problem" at the end does NOT a social documentary make. It's really just the same old straight to DVD standard Van Damme/Seagal level tripe with a blaxploitation spin, and features some of the kinds of fashions that have been forgotten with good reason. Not to mention a soundtrack that ignores the era in which some of the best hip hop was made, instead littering it with the kind of "R'N'B" warbling that is the worst thing to EVER happen to popular music. The direction is beyond amateurish, script cliche-riddled and dumb and performances vary between laughable stereotypes and just plain awful (Chris Rock is truly dire and the Pookie-on-the-pipe montage is one of the most laughable attempts at manipulation I've ever seen). Try King Of New York or Dead Presidents instead, because this is just substandard junk trying to make a few bucks out of showing black people kill each other and pretending it's "important".

Really one of the best modern gangster movies and definitely the most violent and all out crazy only next to Scarface. This is so different from the average Italian Mobster type of movie and it's really refreshing in that sense. However, it does have all the shootings and drugs that are such a staple of the crime genre so you aren't cheated out of that. It's got a great cast led by the unstoppable Wesley Snipes and no nonsense Ice-T. I think this is the most accurate and timely gangster movie of the nineties, which means a lot being released around the same time as Goodfellas, Godfather Pt. III and Casino.

a movie that might take itself too seriously at times, but definitely has the star power and screenwriting to keep the audience plugged into the events as they happen. each of the actors play the types of roles they were all destined and born to play, and although we've seen the plot before, we dont usually see it with this much grit and honesty unless we're watching a mafia film. solid film.