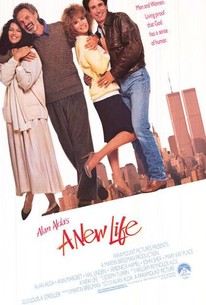 After 20 years of marriage, Steve Giardino (Alan Alda) and his wife Jackie (Ann-Margret) agree to a divorce in this situation comedy. The focus is on both of them as they suffer through matchmaking, blind dates, and their new life as eligible singles. Donna (Mary Kay Place) is Jackie's friend, while Mel Arons (Hal Linden) is the confidante of the vain but likeable Steve. Steven worries that he will never find anyone decent to date until he meets the pretty Dr. Kay Hutton (Veronica Hamel). Jackie is enamored with a sculptor (John Shea) before his glaring faults become too much for her. While Jackie's new relationship is on the outs, Steve prepares for a new life with Kay.

Laura Dickson
as Janet
View All

Critic Reviews for A New Life

Alda's purpose is to show us fairly typical people going through fairly typical things. They live, we watch. On that voyeuristic level, the movie works.

Has little of importance to say about marriage, divorce, or the dating game. And the four lead characters are thoroughly uninteresting.

Audience Reviews for A New Life

There are no featured audience reviews yet. Click the link below to see what others say about A New Life!