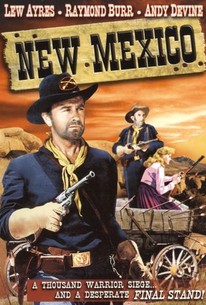 Filmed in Ansco Color (a fancy name for Eastmancolor), New Mexico stars Lew Ayres as Capt. Hunt, a U.S. Cavalry Captain stationed in Indian territory. Sympathetic to the plight of the long-suffering Native Americans, Hunt sets out to sign a peace treaty with the local chief (Ted de Corsia). En route, he rescues saloon girl Cherry (Marilyn Maxwell) from an Indian attack. Cherry remains by Hunt's side when he is forced to defend an Army fortress from the enraged chief, whose son was accidentally killed by a soldier. The supporting cast includes such TV favorites as Raymond Burr, Andy Devine, Verna Felton, and, as President Lincoln, Hans Conreid.

There are no critic reviews yet for New Mexico. Keep checking Rotten Tomatoes for updates!

There are no featured reviews for New Mexico at this time.