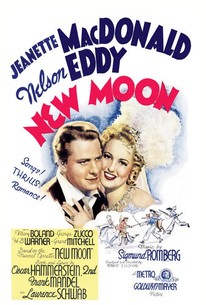 Previously filmed in 1930 with Lawrence Tibbett and Grace Moore, the robust Sigmund Romberg operetta New Moon was given another airing in 1940 as Nelson Eddy-Jeanette MacDonald vehicle. Set in 18th century Louisiana, the story concerns the relationship between haughty plantation owner Marianne de Beaumanoir (MacDonald) and her handsome bondservant Charles (Eddy). Actually a French nobleman in disguise, Charles leads his fellow bondsman in revolt, commandeering a ship and heading out to sea. He ends up capturing a vessel carrying Marianne and a cargo of mail-order brides. Though the bondsmen and the brides get along just fine, the romance between Marianne and Charles is noticeably strained, but the French Revolution comes along to solve everyone's problems. The soaring Romberg musical score includes such favorites as "One Kiss", "Stout-Hearted Men" and "Lover Come Back to Me", all performed con brio by the stars. Comedian Buster Keaton, whose supporting role was cut from the final release print of New Moon, can still be glimpsed among the bondsmen.

Bunty Cutler
as Julie the Maid

Forbes Murray
as Commandant
View All

There are no critic reviews yet for New Moon. Keep checking Rotten Tomatoes for updates!

There are no featured audience reviews yet. Click the link below to see what others say about New Moon!