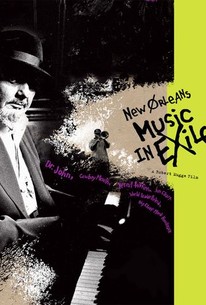 Robert Mugge, the music history-centered documentarian who brought the world The Gospel According to Al Green, The Return of Ruben Blades, The Last of the Mississippi Jukes and many (many) others, helms New Orleans Music in Exile - the first nonfiction film to examine the displacement of Cajun, blues, r&b, jazz and zydeco music acts following August 2005's Hurricane Katrina. The documentarian intentionally gives short shrift to areas of the catastrophe explored by other films (such as Spike Lee's When the Levees Broke), preferring instead to channel his gaze elsewhere. His focus and emphasis thus lie in three arenas: he traces which acts specifically left the Big Easy and which destinations they chose; how New Orleans compensated for that loss; and who plans to return in the imminent future. Many five-star musicians (intimate with Mugge from prior endeavors) turn up to play electric, mesmerizing numbers and to offer occasional insights into the consequences of Katrina; these include Dr. John (on "Right Place, Wrong Time,"), Papa Grows Funk, Theresa Andersson (who covers a rousing version of "Like a Hurricane,") Irma Thomas, The Iguanas and many others. Mugge also works in interviews with New Orleans club proprietors, music journalists and record label proprietors.

There are no critic reviews yet for New Orleans Music in Exile. Keep checking Rotten Tomatoes for updates!

There are no featured reviews for New Orleans Music in Exile at this time.