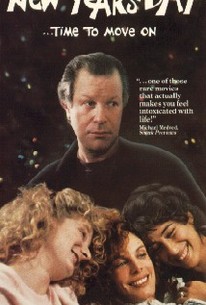 Filmmaker Henry Jaglom plays the leading male role in his characteristically gabby New Year's Day. Jaglom is a writer who insists upon asking disturbing and intrusive questions to the revellers at a New Year's Eve party. His inclusion in the story is explained by having him sublet a California apartment where the previous attendants show no signs of leaving. The crazy-quilt Dramatis Personae include lesbian PR-agent Gwen Welles, erstwhile actress/activist Maggie Jakobson, and lustful fashion-photographer Melanie Winter. Periodically interrupting the steady stream of spontaneous-sounding conversation between these three is Jakobson's randy boyfriend David Duchovny and famed Czech director Milos Forman as a janitor (!). As always, Henry Jaglom is a matter of taste, but you'll very likely want to see New Year's Day for a glimpse at a pre X-Files David Duchovny.

...might hold some appeal for fans of the filmmaker but few others.

A rambling, self-absorbed indie drama from Henry Jaglom, the filmmaker whose very name is synonymous with rambling and self-absorbed.

There are no featured reviews for New Year's Day at this time.