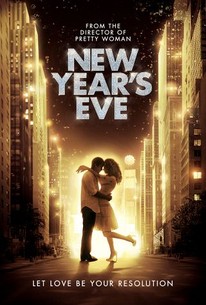 New Year's Eve celebrates love, hope, forgiveness, second chances and fresh starts, in the intertwining stories told amidst the pulse and promise of New York City on the most dazzling night of the year. -- (C) Warner Bros

Til Schweiger
as James Schwab

Ryan Seacrest
as Himself

Penny Marshall
as Herself

Greg Wilson
as Wade the Aide

The movie is a serious waste of time.

To keep it short and sweet: the movie is messier than Times Square at 3 a.m. on January 1st.

New Year's Eve is a perfect example of why the adjective "Hollywood" is so often used as a pejorative.

The only entertaining way to watch New Year's Eve is as a cruel experiment in which performers stranded with absolutely no script support are forced to subsist on pure presence, which quickly becomes a blood sport in which only a few survive.

Written on the level of a bad episode of The Love Boat, this is one of those concoctions that intertwines about 10 storylines and then concludes with a cherry on top.

The only thing that can inspire more cynicism than a holiday's coerced emotions may be a film that both exploits and celebrates said emotions.

The stories are cheesy, all the stars overact and the direction... is disgracefully slack, but if you're watching in a spirit of holiday goodwill then its fuzzy warm-heartedness is passably entertaining.

Far too long and one of the most badly cast films of 2011.

Falls so short it feels like a cinematic hangover without the delightful drunk the night before.

The latest from director Garry Marshall is a completely uninteresting excursion that features a parade of familiar faces given absolutely nothing to do.

The characters presented are so many in number that -- in the end -- you don't feel like you've really gotten to know or empathize with any of them.

New Year's Eve impresses with its guest list but here these famous acquaintances are to be forgotten and never brought to mind.

It was okay. It lost half a star for the inclusion of Jon Bon Jovi and his horrible singing (also it was really creepy watching him romantically involved with the much younger katherine Heigl). There is a lot of stories and characters here. Some I liked (Abigail Breslin, Michelle Pfeifer, Katherine Heigl). Others I couldn't care less about (Jessica Biel, Hillary Swank). If you liked Valentines Day, you might enjoy this, but there is definitely better out there. 31/12/17 rewatch. Took another half star off over the icky pregnant women storyline AND Jon Bon Jovi, who I think I loathe even more now than I did first watching this. I also dislike Ashton these days, which I didn't back then, so he was another nail in the coffin. Unenthralling storyline and too little time spent on the few interesting characters (Pfeiffer, Breslin).

A little bit funny. Good but not great.

Just one year after Garry Marshall's bid at romantic comedy gold, "Valentine's Day", this celebrity tainted mess came into theaters. It's not explicitly bad because of its average sized cast, or how flagrant it is. I can get behind a romantic comedy of epic proportions, because I did so with its predecessor. "Valentine's Day" may not have been wonderful in every way, but it had human stories, different sides to love's enigma, and really tried to say something about the day in question and how transformative it is. Did it succeed at every turn? Absolutely not, but everything that worked well in that movie is ignored in this one. Instead of exploring the many storylines he sets up for his plethora of characters, Gary Marshall simply crams as many familiar faces into this film as possible. Instead of looking at different facets or stages or ages of love, Marshall simply uses the same heart tugging elements that he did in his previous movie: love between two young people? Check. A soldier far from home? Check. At least there were some actually enjoyable performances in "Valentine's Day", and the two that obviously stood out were Jessica Biel and Ashton Kutcher. Both, as well as Hector Elizondo, show up yet again in this film, with no mention of their former characters from the last film. They're completely different characters, and not exactly enjoyable ones at that. Lea Michele and Jon Bon Jovi are in this film, so of course there are musical numbers. (I bet there was no singing, and it was rewritten when Michele was cast.) The love stories are not all that intriguing either: Katherine Heigl is mad at Bon Jovi. That's a relationship, and that's the entire explanation we're given. Josh Duhamel is looking for some girl, and we don't know what's so great about her except for an offhanded cheesy line. None of the relationships are built up, and where its predecessor really looked at all kinds of love, celebrated diversity, and cared about the characters, this film is so haphazard and clumsy. Besides that the dialogue is atrocious, and most of the time I found myself laughing at this for all the wrong reasons. Its predecessor exemplifies love, and truly, this film is just trying to do the same with some formulaic choices, which makes it weak and palatable at best.

All eyes are on New York on New Year's Eve. Similar to Valentine's Day movie it follows the lives of people interacting. Pregnant couples compete to win money for giving birth to the first baby of the new year, Robert de Niro has a dying wish, a guy and gal agree to meet one year on in NYC. Good cast. Heart warming.